Mike began his journalism career at a West Coast NBC television affiliate. As the industry turned digital he expanded into commercial film production, specializing in documentaries and news. Over the years he has worked for a broad range of clients, including ABC, NBC, PBS, King Broadcasting, Discovery, and the PBS series “Frontline.” His investigations have looked at such subjects as death row, the origins of the U.S. Constitution, the building of the Alaska pipeline, hate crimes, the freakout over Y2K, the legacy of a nuclear weapons factory, sexual predators, the siege at Waco, and the world’s endangered fisheries. He is the author of Anatomy of a Beast: Obsession and Myth on the Trail of Bigfoot (University of California Press, 2009). His many awards include the DuPont-Columbia, Cine Golden Eagle, Ohio State Award, and a Peabody. 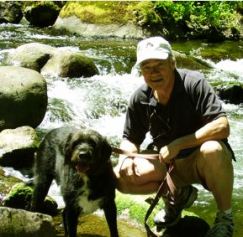 Mike is currently researching and writing a book about a landmark case of environmental pollution in a small upstate New York town, where citizens’ health and homes have been devastated by PCB dumping. Forty years later, they are still fighting the government and the corporate polluter — General Electric — for relief and  justice, a scenario playing out in cities and towns across the U.S. The project is being developed in conjunction with the Schuster Institute for Investigative Journalism at Brandeis University, where Mike is a Senior Fellow. The book is included in a multi-part series being developed for television focusing on the nexus between American industry and environmental regulation.

Also in the works is a project about the evolution of the primate sanctuary movement. Sanctuary: the fight to save the Space Chimps, tells the remarkable story of the late Dr. Carole Noon, who sued the U.S. Air Force to free America’s beloved Space Chimps from the grip of a mad scientist. Her remarkable victory laid the foundation for the creation of the largest sanctuary for domestic chimpanzees in the world.