As Discovery’s Shark Week continues its 25th season, sharks worldwide are under threat of extinction. According to a report released this month by the Pew Environment Group, nearly one-third of shark species are endangered. 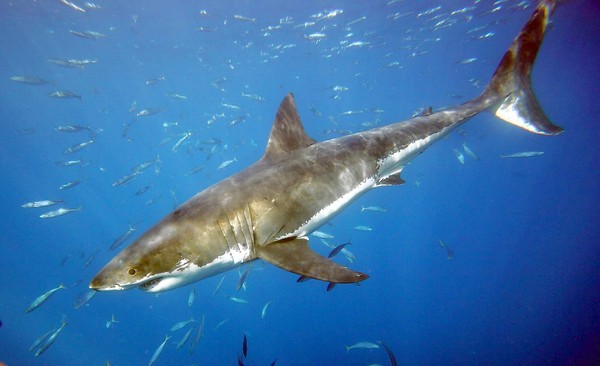 Environmental groups in the U.S. recently petitioned the federal government to list the great white as endangered. Oceana, an international group focused on protecting the world’s oceans, estimates there are only about 340 mature great whites remaining in the northeast Pacific and perhaps less than 100 breeding females. Great white sharks can live about 30 years and reach a size of 6,600 pounds and a length of 20 feet.

One of the main threats to the specie’s survival is bycatch of white shark pups off Southern California and across the border into Mexico, primarily in entangling gill net fisheries targeting halibut, yellowtail, swordfish, thresher sharks and white sea bass.

Chemical pollution is another factor. Young great whites off that same coast have the second-highest mercury level on record for any sharks worldwide, six times higher than levels shown to cause physiological harm to other ocean fish. Studies in that area showed that the sharks liver tissue contained high levels of the contaminants PCB and DDT.

There is also vast poaching going on globally to satisfy the lucrative market in shark fins considered a delicacy in Asian communities in soup. It is estimated that up to 73 million sharks are killed each year for their fins, many of those the most endangered shark species. Much of the finning happens at sea. Rather than filling up a boat with whole sharks, they are simply brought aboard, their fins cut off and, often still alive, dumped overboard. 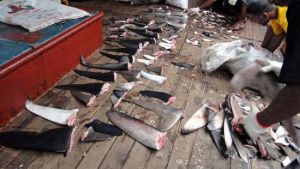 Sharks play a crucial role in shaping the ecosystems they inhabit by affecting the numbers and behaviors of their prey species. As prey resources become more or less abundant, sharks switch between different types of prey, regulating these species’ populations, preventing middle-level specialists from becoming too prevalent and wiping out their often more specific prey/foraging material.

Organisms that used to be held in check by sharks are threatening some of the base levels of the food chain in their environment, which also means they are badly hurting some of the few remaining and relatively sustainably regulated seafood industries left. On the East Coast, for instance, the diminishing number of sharks has led to a surge in skate populations to the point they are threatening the viability of some shellfish populations.

As shark populations decrease the fish they eat grow in numbers, eating more, possibly too much, the result being a complete collapse of the food chain.

California Sea Otters control Urchin populations which, if left unchecked, can ravage kelp forests. Wolves are now understood to be so important in regulating herbivores like deer that they have been reintroduced into places like Yellowstone National Park (with a subsequent increase in community diversity). When wolves were exterminated from Yellowstone in the early 1900s, the numbers of deer and elk increased substantially. They, in turn, denuded the forest of younger trees and saplings, which led to a lack of habitat for songbirds, leading to a boom-and-bust cycle of starvation for the overpopulation of deer and elk. This led to a lack of raw materials (young trees) for beavers, which adversely affected the fish that were dependent on beaver dams to create ponds. The lack of fish went on to hurt other predators that were dependent on fish as a food source. When wolves were reintroduced, this cycle reversed.

Sharks, like chimpanzees, are known as a “keystone species,” which helps regulate the health and function of the entire ecosystem.

Proposals are being presented through the United Nations to encourage the establishment of shark sanctuaries around the world.