The condor once teetered on the brink of extinction. In 1982 the total population of the species totaled just 22 birds. A captive breeding program reintroduced condors into the wild at sites in California, Arizona, and Baja California, and the population grew to nearly 400 birds by the end of 2010. A new study, which focuses on condors in California, describes a population still on the verge of collapse, sustained only by ongoing human intervention. 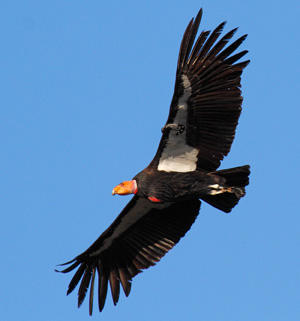 The California condor is the largest land bird in North America, with a wingspan of up to 9-1/2 feet. (Photo: Gavin Emmons)

Condors are opportunistic scavengers, feeding primarily on the carcasses of large mammals such as deer. They can ingest fragments of lead bullets from feeding on carcasses or gut piles of animals shot by hunters. Lead poisoning from ammunition was probably one of several factors that led to the near extinction of the species.

The new study shows that lead poisoning continues to prevent the species’ recovery.

California condors are tagged and monitored, trapped twice a year for blood tests, and when necessary treated for lead poisoning, and they still die from lead poisoning on a regular basis.

The researchers identify the source of the lead in a condor blood sample using a “fingerprinting” technique based on the isotope ratios found in different sources of lead. Condors raised in captivity that have not yet been released into the wild have low blood lead levels, with lead isotope ratios that fall within the range of background environmental lead in California. Most free-flying condors, however, have lead isotope ratios consistent with those found in ammunition.

The study shows that without a solution to the problem of lead poisoning, the condor population can only be sustained through intensive and costly management efforts. Since 1997, about half of all free-flying condors in California have required treatment to remove lead from their blood and supportive care until they are healthy enough to return to the wild. Each year about one in five of the birds need treatment. This usually involves capturing the birds and transporting them to a zoo where they can receive chelation therapy.

Condors are slow to reproduce–females lay one egg every other year. (Photo: Gavin Emmons)

The study found that the free-flying condor population appears to be roughly stable under current levels of intensive management. But without continued releases of captive-reared birds and interventions to treat lead-poisoning, researchers believe the condor population would again decline toward extinction, reducing the wild population in California within the next few decades, once again to just 22 birds.

The current cost of the condor program is estimated to be about $5 million per year, including the contributions of all the agencies and organizations involved in the effort. This level of management would have to continue in perpetuity to keep the population viable.

Efforts in California to address the problem of lead exposure have led to state regulations banning the use of lead ammunition in condor habitat. A partial ban went into effect in July 2008 and was later expanded. So far, however, researchers have found no evidence that the ban has resulted in a reduction in condors’ blood lead levels. The problem is that very small amounts lead have devastating consequences.

The researchers estimate that if just one half of one percent of carcasses have lead in them, the probability that each free-flying condor will be exposed is 85 to 98 percent, and one exposure event could kill a condor.

This research was supported by the National Park Service, Western National Park Association, and the U.S. Fish and Wildlife Service.