For background on a continuing series of posts about whales, the story of Keiko is illuminating.

Keiko–which means “Lucky One” in Japanese–was a male orca who was captured off the coast of Iceland in 1979 at the age of one or two and sold into the marine park industry. After spending three years at an aquarium in Iceland, he was bought by Marineland in Ontario, Canada where he performed before the public. In Canada Keiko began to develop skin lesions indicative of poor health. He was then sold to Reino Aventura, an amusement park in Mexico City where he performed again, spending a decade alone in a tiny tank designed for bottlenose dolphins filled with heavily chlorinated tap water. He was so long and the pool was so shallow, that when he was simply floating his tail nearly touched the bottom.

In 1992 Hollywood filmed him in Mexico as the star of the movie “Free Willy” about a boy who rescues a killer whale from a rundown marine park sideshow.

Media reports surfaced after the film’s release revealing the state of Keiko’s living conditions at the Mexican park and the fact that he had chronic health problems. Public outrage was extreme. Stung by the bad publicity, the film’s producer, Warner Brothers, approached Earth Island Institute looking for a way out of the dilemma. With a $4 million contribution from Warner Brothers, and agreement from Reino Aventura to release the animal into their care, Earth Island founded the Free Willy-Keiko Foundation to rehabilitate Keiko with the hope of possibly releasing him back into the wild.

An aquarium in Newport, Oregon agreed to take him in on the condition that he would not have to perform, and built a pool for him at a cost of more than $7 million. 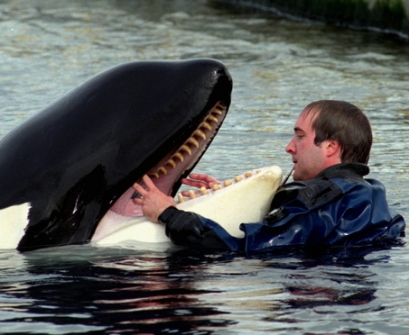 Keiko’s teeth are checked at the Oregon Coast Aquarium in Newport in 1998. (Photo: Don Ryan/AP)

Keiko took up residence at the Oregon Coast Aquarium in 1996. By the end of his first year there he gained more than 1,000 pounds. By 1997 he was lesion free, weighed upward of six-tons and measured 35 feet long.

He was also starting to eat live fish in preparation for release into the wild.

In September 1998 he was flown to the site of his capture 19 years before: Klettsvik Bay in Vestmannaeyjar, Iceland where an ocean pen had been built for him.

His rehabilitation was put in the hands of an international team of experts. Returning a captive whale to the ocean had never been done before, so his keepers just did what Keiko seemed to want to do.

He was fed herring, taken for supervised swims in the open ocean and looked after 24/7. The annual bill for his upkeep was in excess of half a million dollars.

Keiko and his longtime keeper Stephen Claussen in Iceland (Photo:stephenclaussenmemorial.com)

In the summer of 2000 he was gradually reintroduced into the wild northern ocean. For a while it looked as if the relocation effort was succeeding. Fish were provided for him but he appeared to be catching a few wild fish on his own.

Keiko was released from his pen in July 2002. Two months later he followed a boat into the harbor of the village of Halsa on the shores of western Norway, 870 miles away. He was quickly identified and became a huge celebrity. He allowed fans to pet and play with him, even crawl on his back. He became such an attraction that the authorities imposed a ban on approaching him.

He soon stopped feeding himself, and it became obvious he would again need human care.

Desperate to wean him from people and begging for handouts, with help from the Norwegian government he was shifted to Taknes Bay, a more obscure fjord; a clear, calm pocket of coastal water deep enough that it doesn’t freeze in winter. Keepers fed him, but he was free to roam and did, often at night. He was equipped with a tracking device that let his four handlers pinpoint his location provided he stayed within a range of about five miles. His keepers reported that the whale seemed to be adapting to living in the wild, evidencing behaviors common to wild orcas.

They took him on “walks,” leading him around the fjords from a small boat at least three times a week.

In 1993 he showed signs of lethargy and was given antibiotics. He died quickly, beaching himself up against a pier, seeking human consolation. He was somewhere between 25 and 27 years old, an age not unusual for male orcas, whose average longevity is thought to be around 30 years. Pneumonia was later determined as his probable cause of death.

Thorbjorg (Tobba) Valdis Kristjansdottir, a keeper who spent two years working with Keiko in Iceland, calls him “an unbelievable animal. He absolutely had a definite personality. I spent a lot of time alone with him, and I talked and talked and talked to him. He would just kind of dance in the water.”