Aurochs were magnificent beasts. Standing well over six feet tall at the shoulder and weighing over a ton with huge sweeping horns, they once roamed the whole of Europe, large parts of Asia, and North Africa.

The aurochs date as far back as 2 million years ago. They appeared approximately 700,000 years ago in Spain. Ancient man drew their images on the walls of caves in France and Spain, as historical testament to their once prolific existence throughout Europe and Asia. 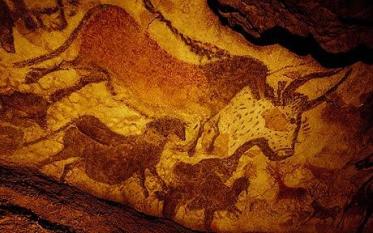 Aurochs depicted in ochre and charcoal on the cave walls at Lascaux in France. (Photo: ALAMY)

Around 30 BC Vergillius mentioned that ‘wild aurochs’ were captured in the north of Italy. They were one of the wild animals ancient Romans made big efforts to catch and transport to Rome and other cities to use in arena fights.

Caesar described them in The Gallic Wars as being “a little below the elephant in size” and a favorite hunting prey for wild Germanic tribesmen. In ancient times, killing an auroch was seen as a great demonstration of courage, with the horns turned into silver-clad drinking cups. Having figured prominently in Teutonic folklore, they remain as a heraldic symbol for several European states and cities.

The species was gone from the majority of its range by the 15th century and persisted only in the Jaktorowka Forest, Masovia, Poland. The last wild individual was reported to have died in 1627.

The Nazis ordered a pair of German zoologists to recreate the auroch as part of the Third Reich’s belief in racial superiority and eugenics.

The result, known as Heck cattle, may to some extent resemble the ancient aurochs, say experts, but they’re genetically quite different. Heck cattle, for example, are more aggressive than aurochs because they were bred, in part, using Spanish fighting bulls.

Using genetic expertise and selective breeding of modern-day wild cattle, scientists today are attempting to bring the giant animals back to life in a form that more truly replicates the ancient auroch.

Whether it’s possible to breed a true auroch is very much an open question. Genetic evidence suggests all “taurine” cattle (the docile cows and raging bulls common to Wild West films) descend from only about 80 females and came from a single region in what is now Iran about 10,500 years ago.

The fact that all cattle seemingly descend from a single domestication event is unusual. For most other domesticated animals like horses or dogs, there’s good evidence to support multiple domestication events. But it’s known from analysis of ancient Iranian cattle bones that all cows throughout history likely only came from this one tiny auroch population.

Little genetic variation meant the founding population didn’t have many different versions of the mitochondrial genes to start with, which are necessary to replicate a true descendent.

The size and nasty disposition of the wild auroch would have made it a formidable beast to tame for the ancient Iranians and possibly the reason why domestication only occurred with a small number of animals. Scientists who have studied the auroch think that capturing and containing them would have been extremely difficult for hunter-gatherer societies, which represented the vast majority of human populations throughout Eurasia 10,000 years ago where goat was the preferred domestic species. The few sedentary, agricultural groups who had settled down into villages were the only ones even capable of domesticating such a beast.

And what if scientists were able to come up with the real thing. Even the wild cattle we have today are very hard to handle. Aurochs were significantly larger than any cattle in existence. Brought to life today they would be potentially dangerous. There would be some serious management issues. To look after their teeth and feet, for instance, you might have to sedate them with dart guns. As one researcher put it, “You wouldn’t want to try to milk one.”