The Lear’s Macaw is a striking blue parrot from Bahia state in Brazil.

It was named after the poet, author, and artist, Edward Lear, who published many drawings and paintings of live parrots in zoos and collections.

In 1994 the population of the Lear’s Macaw was 140 birds. In 2007 a total of 751 individuals were counted as they flew out of the canyons where they roost and nest to their feeding areas in groves of licuri palms. 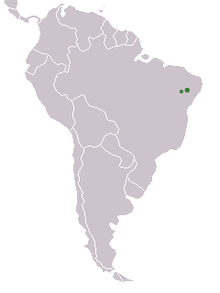 In 2009 the conservation status of the species was downgraded to endangered from critically endangered by the International Union for Conservation of Nature, prompted by annual counts at two roosting sites that estimate the population at approximately 1000 individuals.

It’s future is imperiled by habitat loss, hunting and more recently, trapping for the aviary trade.