Crew member Dan Fisher, aboard the Dutch flagged ship SV Antigua in the waters off the Svalbard Archipelago in Norway got photos of a white Humpback.

White whales are unusual, but not unheard of. Another white Humpback, known as Migaloo, has been seen over the last 20 years off the coast of Queensland in Australia. Last October, a white Humpback calf was seen off the Queensland Coast. 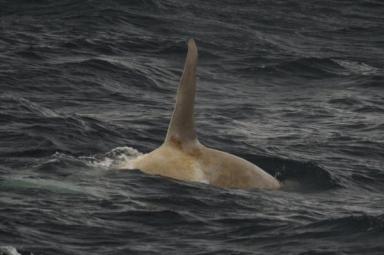 Scientists aboard the NOAA research vessel Oscar Dyson in the North Pacific sighted an off-white orca with its pod about two miles off Kanaga Volcano, part of Alaska’s Aleutian Islands.