Carnivores in the city

P-22, a mountain lion from the Santa Monica Mountains walked eastward across the 405 and 101 freeways and settled in Griffith Park, smack in the middle of downtown Los Angeles. During the journey, an odyssey of perhaps 20 miles, the cat had to cross concrete and backyards, dodge commuter traffic and thread an obstacle course of culverts, bridges and roads.

Mountain lions have recently been shot near the Wrigleyville neighborhood of Chicago and in Des Moines, Iowa.

No surprise, the most common mammalian carnivores to establish thriving communities in urban settings are coyotes. For at least the last six years, a coyote community has occupied a third of a square mile area about five miles from Chicago O’Hare International Airport.

Coyote in a downtown Chicago Quizno’s sandwich shop in 2007.

Researchers at Ohio State University, conducting a long running study of coyotes in greater Chicago, estimate the 9 million people in the metro area share their space with about 2,000 coyotes. 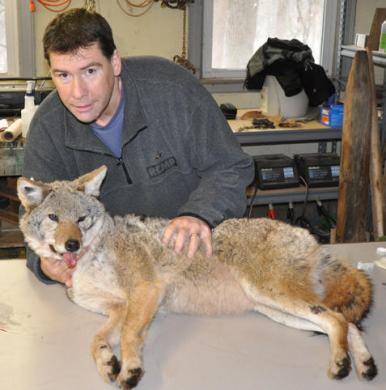 The researchers found that the urban coyote pup survival rate is five times higher than the rate for rural pups. In both environments, humans are the coyotes’ primary predator; cars being the No. 1 cause of death.

This coyote hopped a Max train leaving the Portland, Oregon airport in 2002. (Photo: Port of Portland)

Opportunity for food abounds in urban areas for coyote communities. Once they settle, resident coyotes don’t move much. Transient animals, typically youngsters that have recently left their parents’ pack, will try to find a vacancy in an existing territory or find a new area to start their own pack.