Crossed fingers he doesn’t get shot. The fate that befell his brother. 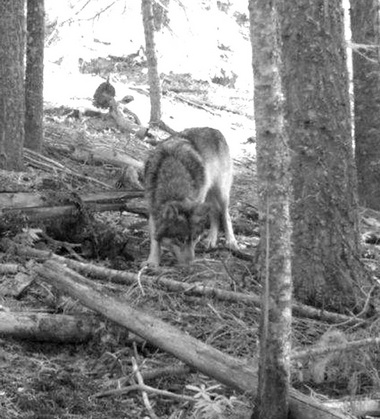 Nov. 14, 2011, photo from a trail camera shows OR-7 on public land east of Butte Falls in Oregon’s Jackson County.

OR-7 has now migrated into an oak-chaparral woodland near Lake Almanor east of Red Bluff, according to the California Department of Fish and Game.

He spent the summer hunting deer at 6,000 feet elevation in the Plumas National Forest south of Lassen Peak, where the Cascade Range and Sierra Nevada mountains meet.Winter storms lashing the high country are now forcing deer to migrate down into the foothills at about 1,000 feet and OR-7 has followed. 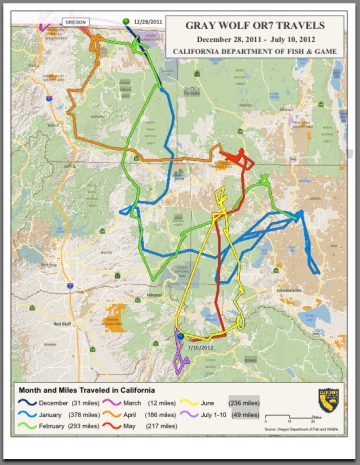 OR-7 wanderings in northern California.

He was born into the Imnaha pack in northeastern Oregon’s Wallowa County 3 1/2 years ago, and captured and fitted with a GPS/radio-telemetry collar in February 2011. Seven months later, he set off on an historic 1,000-mile trek that’s taken him across Oregon to Crater Lake and south into California.

Biologists believe he’s searching for a mate and a place to start a new pack.

Karen Kovacs, wildlife program manager for the California Department of Fish and Game, says “He is feeding well, he is able to travel well.” She calculates his weight at 100 to 110 pounds, with paws measuring 5-by-5 inches. He’s so elusive that only about five people have glimpsed him since he entered California, she said.

When OR-7 crossed into California last December, Oregon had 29 known wolves. Today, a rough census of 25 new pups brings Oregon’s known wolf population to more than 50, in six separate packs. 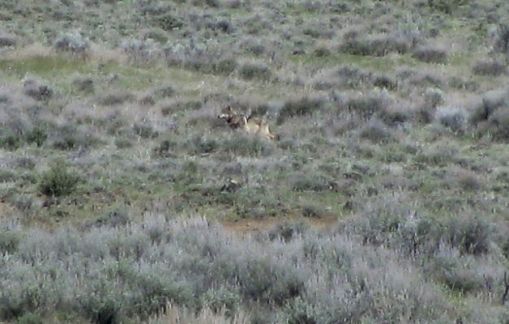 California state biologist Richard Shinn snapped a photograph of OR-7 on May 8, after spotting him on a sagebrush hillside 100 yards away in southwestern Modoc County. Shinn was among a group of biologists, game wardens and a federal trapper who were there to talk to local ranchers about the prospect of having a wolf in their midst.

So far, OR-7 has survived his California adventure by switching from his preferred diet of elk to deer, which are more available in California. He won’t cross major roadways and has turned back several times when he came near Interstate 5.

“Rivers don’t seem to be a barrier,” Kovacs noted. “He swam across the Klamath River several times.”

But his biological clock is ticking. He’s past the midpoint of a life span seldom exceeding five to seven years for wolves in the wild. OR-7 must find a mate or become a “biological dead end.”

OR-7’s behavior, called dispersal, is not atypical of a wolf his age.