Message from the observers: Although we had great visibility today, we did not see many gray whales compared to yesterday; this could be a local lull in the nearshore migration, or a lot of today’s gray whales may have chosen an offshore migration route (favored by many adult gray whales). Most of our five gray whales passed by us extremely close to shore. Whales in three of our four sightings fluked. One whale kept a very low profile. It would come up and only expose its blowhole region; when it reached the area right in front of us, it showed its back and flukes. We tracked at least ten FIN WHALES; one pair kept lunge-feeding, and other fin whale fluked. We also spotted multiple groups of PACIFIC WHITE-SIDED DOLPHIN (including a group of about twenty that came in just above the kelp, swam in circles, and had at least one calf with them), COMMON DOLPHIN, and BOTTLENOSE DOLPHIN….

This year, 460 southbound gray whales have been counted, compared with 455 last year. Last year and this year’s numbers are some of the largest southbound counts that the ACS/LA census project has seen in about 15 years.

Typically, as evidenced in the report above, gray whales travel by themselves. Sometimes in groups of three. On the 20th, whale watchers counted 23 — give or take a whale — in a single pod.

The group was the largest that volunteers with the American Cetacean Society/Los Angeles Chapter Gray Whale Census and Behavior Project have seen in 30 years. 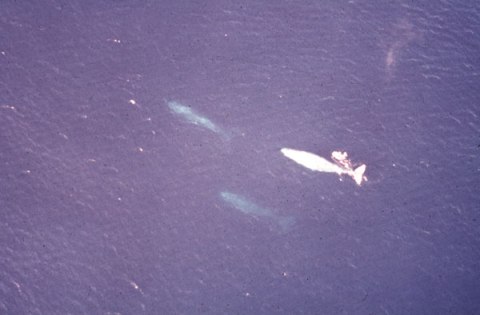