140 TIGERS IN THE FREEZER

near Guilin in Hunan Province, south-east China, appears to be a depressingly typical Third World zoo, with a theme park restaurant and open areas where tigers roam.

The menu at the restaurant reveals that it’s more than a zoo: stir-fried tiger with ginger and Chinese vegetables, tiger soup and a spicy red curry made with tenderized strips of, well, you have a choice–lion meat, bear’s paw, crocodile and snake (note: the bear’s paw has to be ordered in advance as it takes a long time to cook). If you’d care for a drink, you can wash your meal down with a glass of wine made from Siberian tiger bones.

A waitress is proud of what they do. “When Government officials come here,” she says, “we kill a tiger for them so they have fresh meat.” Other visitors are given meat from tigers killed in fights. “We now have 140 tigers in the freezer,” she says.

The animals are raised in battery-style cages—large scale imitations of the cages used to house factory raised chickens—between three and five tigers living in a space no larger than a typical family living room. 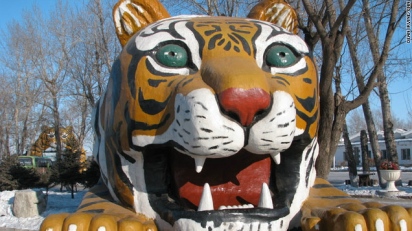 The park, one of at least three in China, raises and slaughters more than 1,300 Bengal, South China and White tigers, 300 African lions and 400 Asiatic black bears for food and traditional Chinese medicines.

Selling tigers is against Chinese and international law, and helps fuel the poaching that is driving tigers to extinction. But business at the park is good.

in Chon Buri Province, an hour outside of Bangkok, Thailand, is home to more than 200 Bengal tigers. Previously implicated in a sale of 100 tigers to China, conservation groups believe Sriracha and the other tigers farms are part of a vast network supplying skins, animal parts, and meat and bones of captive-bred tigers for luxury items and traditional medicine throughout Asia.

restrict operations to breed tigers and other Asian big cats to the purposes of conservation; CITES specifically states ‘tigers should not be bred for trade in their parts and derivatives’.

Parties to CITES will convene in Bangkok, Thailand in March. Compliance with the decision to end tiger farming is on the agenda.