the iconic animal whose image helped inspire resistance to the British during the American Revolution, and in recent years became a favorite at Tea Party rallies, is rapidly disappearing in the southeastern United States.

Once plentiful in longleaf pine savannas across the southeastern U.S., habitat loss—just 3 percent of its original habitat remain, road mortality, and human predation have left the animal in danger of extinction.

Particularly egregious in an age when people should know better, Florida, Alabama, Louisiana, South Carolina, Georgia and Mississippi continue to allow the slaughter of thousands of diamondbacks for their skins and meat with no harvest limits.

festivals that offer prizes to encourage hunters to collect and kill the snakes, are held in Georgia, Texas, Oklahoma and Alabama.

Snakes are gathered throughout the year by individuals who compete for cash prizes in categories such as, “largest snake” and “most snakes caught.” They are then milked for their venom (organizers claim it’s given to medical labs for research). What happens to the snakes afterwards depends on who you ask.

Last year at the rattlesnake roundup in Sweetwater, Texas, people stood in a long line waiting to pay for the experience of skinning one of the headless snake bodies that writhed in a pile at the base of the skinning stands. The rear wall of the pit was covered with white paper, where these people would be invited to leave their bloody handprints and sign their names. 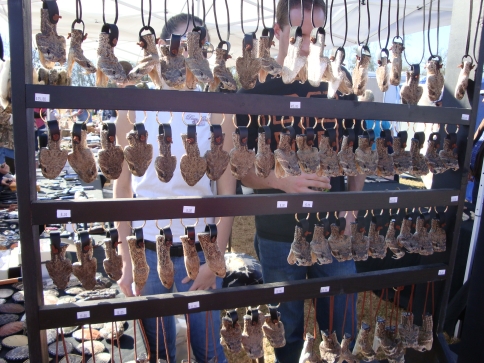 Event organizers at the annual Whigham, Georgia rattlesnake roundup held last week claim that the snakes this year weren’t killed during the event but sold to an operation that kills and processes them later. The claim seems dubious considering the DEAD SNAKE artifacts on sale–in any case, the net effect is the same: wanton slaughter of an endangered animal once held in high esteem by people who respected the outdoors and the wild creatures in it.

Featured events include “snake handling”, snake cooking and “snake demonstrations.”
How the “handling” works apparently: the snakes are frozen to slow their reflexes to make them easier to handle. Then their fangs are pulled out with pliers and their mouths sewn shut, and they are passed around for photo opportunities.

Many species are harmed

other than rattlesnakes. To catch snakes, hunters spray gasoline into tortoise burrows, destroying the burrows and often killing the animals inside. More than 350 species depend on tortoise burrows for food and shelter. Roundup organizers claim that hunters no longer use gassing to catch snakes, but in January 2010, wildlife officials in Georgia apprehended four men who had gassed 50 tortoise burrows to collect snakes for the event in Whigham.

All of Georgia’s other roundups have abandoned or replaced their events with festivals celebrating local wildlife; Last year Claxton, Ga. held its first Claxton Rattlesnake and Wildlife Festival. No snakes were killed at the festival and it received a boost in attendance and praise from environmental groups, biologists, and the Georgia Department of Natural Resources for ending the practice of killing rattlesnakes.

launched a full status review of the species last spring to see if it may warrant protection under the Endangered Species Act. Two days ago, the nonprofit Center for Biological Diversity filed a formal notice of intent to sue USFW for failing to protect the eastern diamondback rattlesnake under the Act, an action intended to light a fire under the agency because inaction means fewer snakes.