are being investigated by police in Lawrence, Kansas after a turkey was killed during a frat house party in December. The turkey was rented for the winter formal party and someone decided to throw the bird into the middle of the crowd. According to members of a band that was present, several individuals began chasing the bird and the situation turned into a blood lust. It ended when a man broke the bird’s neck. No formal charges have yet been filed against any individuals.

Fort Wayne, Indiana, was sentenced to a year in prison for dropping a kitten into a fire. The kitten “Sparkles” survived. Jerome was also ordered to undergo a psychiatric evaluation and perform community service.

A neighbor rescued the kitten after hearing it crying. According to court records, in 2009 Jerome pleaded guilty to domestic battery and served four months in jail.

was convicted of animal abuse for putting his grandmother’s dog into a hot oven after the dog allegedly nipped him. Parrish, who told police he had “anger issues, ” was sentenced to 30 days in jail and five years probation. Parrish admitted to deputies that he lost control, grabbed the dog and started punching it in the head with his fist, tried to strangle the dog and then put him in an oven he had pre-heated to 350 degrees. Kudo, suffered cuts and bruises from the beating, as well as singed hair and burns on his paws that were so severe he had trouble standing. Veterinarians say the six-year-old dog is expected to make a full recovery . 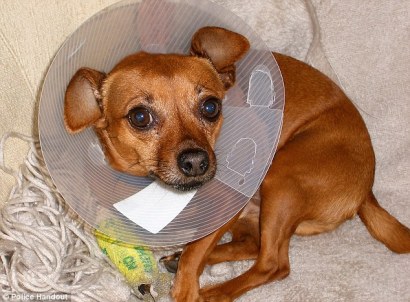 Kudo is expected to make a full recovery.

in Mount Oliver, Pennsylvania, 31, is charged with shooting a pitbull named Kila in the head with a crossbow. He faces two counts of animal cruelty. Kila, survived.

Kila, victim of a sick mind.

Fitzgerald’s mother said her son shot the dog because his girlfriend demanded he do it after Kila was playing rough with her puppy. “She was yelling at Jesse to do something to the dog. So Jesse did.”