is revered in the south. Arkansas State University Athletic teams call themselves the Red Wolves. People there should step up in its defense. But it doesn’t appear they are. 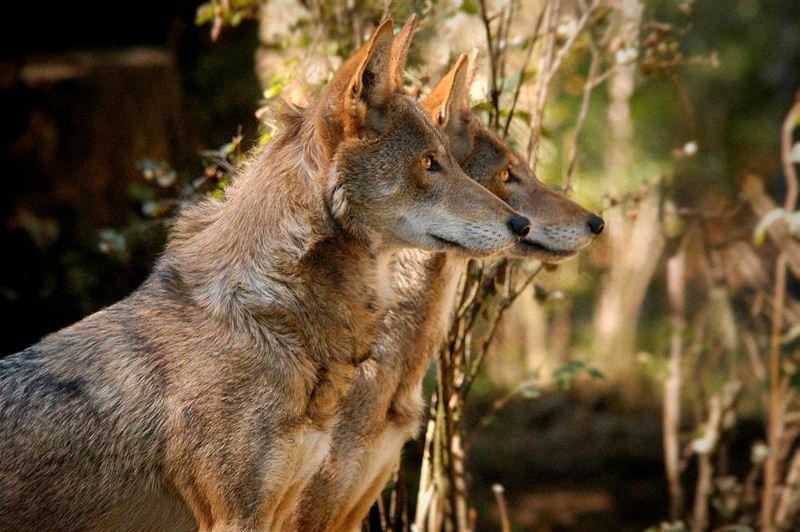 The few Red Wolves left in the wild, saved from extinction by a breeding program and nearly all located in the state of North Carolina, are being killed by hunters at an alarming rate.

U.S. Fish and Wildlife Service records show that 10 Red Wolves out of total wild population of around 100 were killed by suspected gunshot last year. At least three of these deaths were reported by hunters who claimed they thought they were shooting at a coyote. Okay, the Red Wolf looks a lot like a coyote. But putting aside the notion that any responsible hunter should study their intended prey carefully before pulling the trigger—it’s fair to ask what is humane about spotlighting animals at night from a road, a tactic favored by redneck hunters and drunks, often one and the same.

In an attempt to save the Red Wolf, the Animal Welfare Institute and several other conservation organizations got a temporary injunction last August against spotlight hunting of coyotes at night in a five-county area of eastern North Carolina. Unfortunately, the NC state legislature this month has a rule on the docket that would permanently allow spotlight hunting of coyotes at night.

was the subject of an ANIMAL POST November 23, 2012, reporting that a fourth radio-collared Red Wolf had been shot dead in two months in North Carolina, all killed in approximately the same area. There were suspicions that the death of a fourth collared wolf might have been something other than coincidence, including the possibility that the GPS’d wolves were being tracked by someone other than the Wildlife Service.

Canis rufus is one of the world’s most endangered canids. The species was declared endangered in 1967 and the U.S. Fish and Wildlife Service declared them extinct in the wild in 1980. Biologists began a captive breeding program using 14 wolves captured from a remnant population found along the Gulf Coast. Since then, enough wolves have been bred to implement a restoration program on Alligator River National Wildlife Refuge in north-eastern North Carolina.

is a constant problem as hunters seem to consider wolves enemy Number One as evidenced by wide open hunting of grey wolves that has commenced in the last year in Alaska, Idaho, Minnesota, Montana, Washington State, Wisconsin and Wyoming since wolves were stripped of their endangered status by the federal government.

What is it about wolves?

Why the bloodlust to kill them? There may be some truth in a theory espoused by James William Gibson in Earth Island News that beginning in the late 1990s, the northern Rockies became a redoubt for far-right wing paramilitary culture types who saw themselves as “armed warriors facing federal tyranny, ranchers angry that they did not own the lands they leased from the federal government to graze cows, hunters who saw the region’s deer and elk as their private property, and those who hated all forms of environmental regulation.” Together they created a common mythology that demonized the wolf. The demonization spread to the mainstream Republican parties in Idaho, Montana, and Wyoming, eventually capturing Democratic leaders desperate to be elected in these conservative states. Montana Senator John Tester, a Democrat facing a tough re-election bid in 2012, sponsored a legislative “rider” to a federal budget bill that delisted wolves. The bill passed both houses and President Obama signed it. The slaughter began soon after.

The situation is much the same in Montana. More than 170 wolves have been trapped and shot so far in the state’s still ongoing 2012-2013 season. That figures includes the killing of seven radio-collared wolves, including the famous, often photographed 832F, the majestic female alpha of the Lamar Canyon pack that roams Yellowstone National Park.

for wolves remains open in the short-term. Secretary of Interior Ken Salazar, who oversaw wolf delisting, is resigning. It is possible that another secretary might change policy.

Call your congressman to protest this senseless ethical and ecological disaster.