recently arrived at Chimp Haven, the national chimpanzee sanctuary, from the University of Louisiana’s New Iberia Research Center. Over the next few months New Iberia (which has lost its NIH chimp research contract) will send the sanctuary another 102 chimps.

had originally planned to retire only 10 animals to sanctuary, and send New Iberia’s remaining 100 animals to the Texas Biomedical Institute, with the understanding that the animals would be permanently ineligible for further use in biomedical research. The plan was scotched after several animal rights groups objected to sending any of the animals to another research facility.

The recommendation is awaiting final agency approval following a 60-day public comment period. If all goes as it should, within the next five years another 300 chimpanzees will be retired to Chimp Haven.

For more information and to leave a comment, go here. 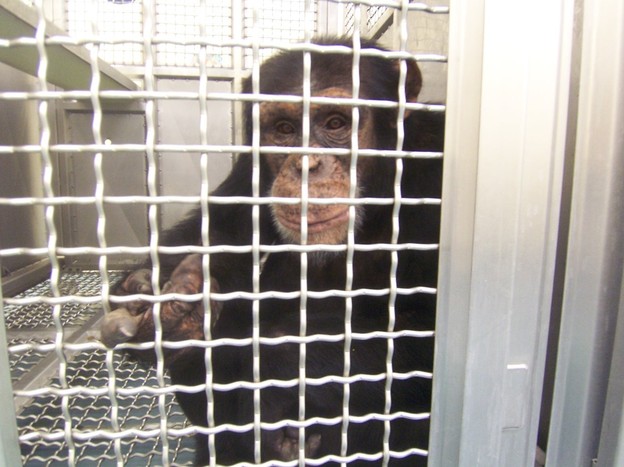 It’s a shameful blot on the biomedical industry that these chimps haven’t been moved to sanctuary much sooner. According to a recent study that reviewed autopsy reports on 110 chimpanzees in or from U.S. labs who have died since 2000, 64% suffered from serious chronic illnesses, while 69% had diseases which should have caused them to be retired from research use.

“All chimpanzees suffering chronic or incurable physical or psychological illness should be immediately released to sanctuary,” said study co-author and NEAVS president Theodora Capaldo. “They deserve to spend every minute of their remaining years in the comfort and safety of a healing environment.”

The NIH actions come in the midst of efforts on several fronts to end all experiments on chimps, including a bill to stop experimentation on all great apes, which did not pass in the last Congress, but which proponents hope to reintroduce, and a pending decision by the Fish and Wildlife Service on whether captive chimps should be considered endangered, as wild chimps are.