Accompanying the recent news that “researchers” at the University of Wisconsin are continuing to conduct obscene animal experiments in the tradition of the demented Harry Harlow, evidence unearthered in a PETA lawsuit reveals that the school has still more secrets in its closet.

Their subject was a cat named Double Trouble.

by screwing a steel post into her skull and implanting electrical devices deep inside both her ears. After being deprived of food for several days to coerce her into cooperating in exchange for a morsel of food, they bolted her head into place, restrained her in a nylon bag and forced her to listen to sounds coming from different directions.

Records say that she was observed twitching, which the clinical notes indicate was a “neurological sign.” Her face became partially paralyzed and the head wound that experimenters created during surgery never healed.

She endure almost two months of this misery.

One of the last entries in her records states that she “appear[ed] … depressed.” In the end, experimenters noted she was too ill to continue and that the device they had implanted did not work, so she was killed and decapitated so her brain could be dissected. A former UW-Madison veterinarian who oversaw the treatment of this cat and others recently issued a letter confirming this abuse, stating that many of the cats “suffered unnecessarily.” 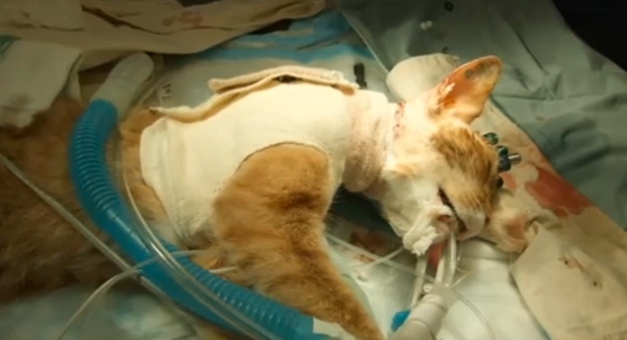 For a more detailed—and gruesome—look at what happened, see this video.

No peer-reviewed papers have been published in any scientific journals as a result of the suffering the cat endured.

Correspondence between UW experimenters and their collaborators conclude that the experiment was a failure because there was a problem with the cat’s surgery.

This experiment is part of a larger project that has received more than $3 million from the National Institutes of Health (NIH) with the stated purpose of understanding how the brain determines the location of a sound.

Experimenters justified the use of 30 cats per year not by saying that the experiments would lead to improvements in human health but rather by stating that they needed to “keep up a productive publication record that ensures our constant funding.”