This man, photographed in Lijang, a city in The Three Parallel Rivers Region of Yunnan, China, said his eagle caught all of its own food – although, he admitted, it was often rabbits he purchased and released for the bird to catch. 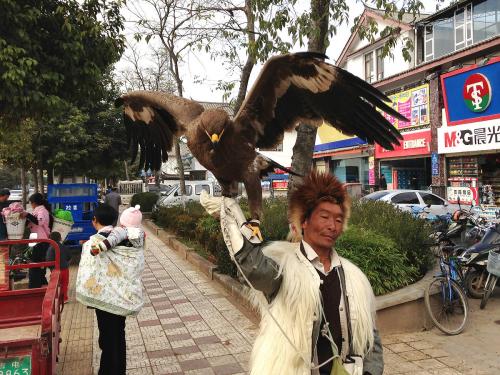 The fake cowboy and 4 other men, all dressed in identical outfits, each with a golden eagle, stroll the streets looking for tourists willing to pay10 Yuan, about $1.50, to have their photo taken with an eagle perched on their arm. And business is good.

The eagles are allowed to hunt on their own – but the owners recapture the birds before they can eat their prey. “If it is hungry, it will come back,” one cowboy explained. “But if it eats until it is full, it will fly away forever.”