And there are very few things more seductive than the dirty talk of what historian and writer James McWilliams calls “agricultural pornography.” Words whispered in just the right way, “the idyllic image of farm animals roaming a verdant pasture”—an image promoted by every purveyor of meat products in the U.S.—”can make otherwise enlightened consumers melt, thereby forgetting the cold truth that an owned farm animal is an abused animal.”

does not mean hens are treated humanely. They may still have their beaks cut off in a practice called “debeaking,” because it cuts down on the amount of injuries when they fight each other. They may still be given antibiotics. When they are too old to lay eggs at a profitable rate, they are slaughtered for cheap meat. 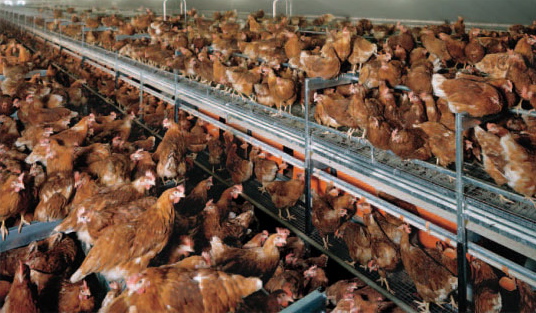 The “platforms”  at Black Eagle Farm—that advertises itself as a “traditional family farm” and “animal friendly”—designed to cram as many hens as possible into a single building, turn the concept of  “cage free” on its head.

female chicks are sold to become laying hens, but male chicks are killed because they are useless for laying eggs, and they are the wrong breed to be profitable meat chickens. A video taken at the Hy-Line Hatchery in Iowa, the world’s largest hatchery for egg-laying chickens, shows how 150,000 male chicks are ground up of every day while still alive. 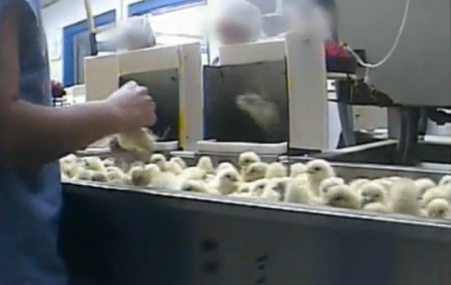 used at Iowa Select Farms in Kamrar, Iowa, subject pigs to a lifetime of virtually immobilized confinement. A Mercy For Animals video shows the operation in horrid detail. Confining mother pigs in such crates is so patently cruel that the practice has been banned by the entire European Union, New Zealand, and the states of Florida, Arizona, Oregon, Colorado, California, Maine, and Michigan. 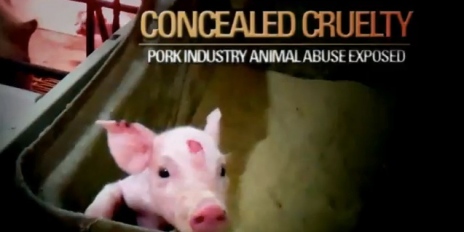 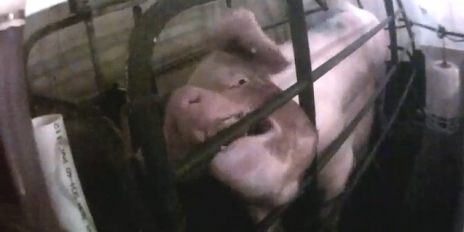 Iowa Farms Select is the nation’s 4th largest pork producer, selling to companies such as Costco, Hy-Vee, Safeway, and Kroger. 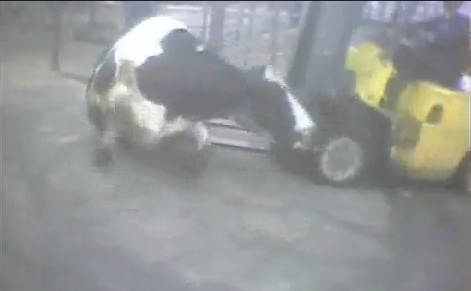 those too weak or sick to walk—shown in a video shot at the Hallmark Meat Company in California in 2007, being dragged by chains, rammed by forklifts and sprayed with high-pressure water by employees who wanted them to stand and walk to slaughter—sparked the largest beef recall in U.S. history. The ensuing legal battle cost taxpayers $150 million. Last year the federal government entered a final judgment of $497 million against the company, which was at one time one of the biggest suppliers of ground beef to the National School Lunch Program. The judgment could not be collected because the company went out of business.

of cows struggling to walk and even stand on their way to slaughter at the Central Valley Meat Co. in Hanford, California shown on a video released last year by the animal welfare group Compassion Over Killing, prompted Federal regulators to shut the plant down. It was soon reopened.

who expose such abuses are now being shopped to states around the country in the form of “ag-gag” laws.

Last year, Iowa–a major egg-producing state and the largest producer of pork in the nation–despite abuses documented at Iowa Farms Select and Hy-Line hatchery, passed a bill making it illegal to deny being a member of an animal welfare organization on a farm job application.

Ag-gag legislation is spreading with the help of the American Legislative Exchange Council (ALEC), a conservative business advocacy group funded by large corporations, that encourages lawmakers to “exchange” legislative ideas from state to state. So far this year, nine states have current or pending anti-whistle-blower bills before their legislatures.

These bills are troubling not only to animal protection activists, but also to those concerned with food safety, labor issues, free speech, and freedom of the press. The bills would apply equally to journalists, activists and employees. By prohibiting any type of undercover recordings, a farm’s own employees would be prohibited from attempting to record food safety violations, labor violations, sexual harrassment incidents or other illegal activity.

The meat industry’s response to these exposes has not been to try to prevent these abuses, but to prevent Americans from finding out about them in the first place. ALEC has labeled those who interfere with animal operations “terrorists.” The label is more aptly applied the other way around.