The director of production in the American Humane Association’s film and television unit (AHA), filed a lawsuit December 31 last year, against her former employer and HBO, producer of the television series “Luck.”

Barbara Casey, who worked for AHA for 13 years, is suing the organization for allegedly wrongfully terminating her in January 2012. She’s also suing HBO and Luck producer Stewart Productions for aiding and abetting an alleged abuse cover-up months before the series was put to sleep in March 2012.

According to the lawsuit filed in Los Angeles Superior Court, Casey says the AHA observed drugged horses, underweight and/or sick horses were routinely used for work on the show, horses were misidentified by producers so that animal safety reps couldn’t track their medical histories, and more.

According to the complaint:

“A horse named Outlaw Yodeler was killed during production on April 30, 2010.“

“A horse named Marc’s Shaddow was killed during the filming of a racing scene on March 29, 2011; the necropsy report revealed degenerative arthrosis and other pathologies inthis retired racehorse that made him unsuited for use in filming racing scenes.”

“A horse named Hometrader was killed during the summer of 2011; AHA told its representatives not to document this horse’s death because he was killed during a summer hiatus from filming and therefore “did not count.”

“A fourth horse was killed in March, 2012 leading to cancellation of the series.”

“The Production Defendants aided and abetted in Plaintiff’s termination so that the Luck production would not be made more costly, time consuming and/or otherwise disrupted.”

Casey says HBO and Stewart Productions wanted to save time and money and that rather than cooperate with AHA, the production companies pressured the organization to allow them to violate the AHA’s animal safety standards. 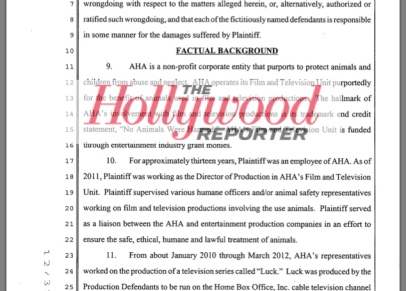 In a statement to The Hollywood Reporter, HBO says: “We took every precaution to ensure that our horses were treated humanely and with the utmost care, exceeding every safeguard of all protocols and guidelines required of the production. Barbara Casey was not an employee of HBO, and any questions regarding her employment should be directed to the AHA.”

As background – two months after HBO canceled the series, watchdog group PETA released documents obtained from a whistleblower that claimed trainer Matthew Chew — hired by the production company — allegedly allowed for the following to take place with the knowledge of veterinarian Heidi Agnic:

• Horses were underfed in a bid to save money, with one 300 pounds underweight, and Chew proposed covering the protruding ribs of another horse with a blanket during filming.
• Sick horses were regularly used in filming, with some ill horses disappearing from the set without explanation, and the trainer warned he could be charged with neglect.
• Improperly trained, unprepared horses were used during racing scenes, putting jockeys and the animals at risk.
• Horses were regularly tranquilized in order to keep them docile.