In Chad, on the night of March 14-15, poachers slaughtered 89 elephants, including over 30 pregnant mothers.

One of hundreds of elephants killed in a single incident in Northern Cameroon
(Photo: WWF/Bouba N’Djida Safari Lodge)

announced on Saturday that they are sending a thousand soldiers and law-enforcement officials to start joint military operations to protect the region’s last remaining savanna elephants, threatened by the Sudanese poachers who are on a killing spree in the region.

The mobilization could be a sign that Central African countries are beginning to take elephant poaching, which has decimated populations across Africa, more seriously.

The World Wide Fund for Nature (WWF) reports that the group of heavily armored, horse-riding poachers are also believed to be responsible for killing some 30 elephants in the Central African Republic earlier in the year as well as 300 elephants in Cameroon’s Bouba N’Djida National Park in early 2012. 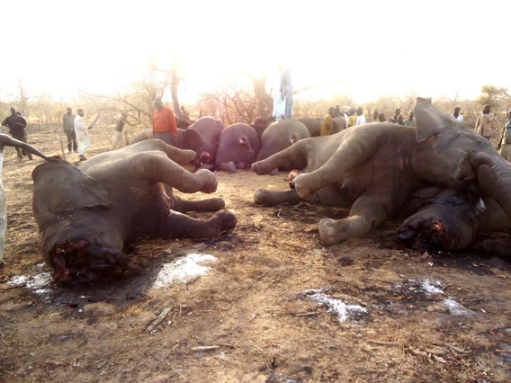 Savanna elephant populations in the Central African Republic – the country with historically the highest numbers of savanna elephants in the region – are believed to have plummeted from around 80,000 thirty years ago to a few hundred today.

Given the increasingly dire elephant poaching crisis, delegates at the 16th meeting of the Conference of the Parties to CITES, recently concluded in Bangkok, essentially sidestepped the issue, choosing to shy away from the controversial topic of elephants and ivory for fear of stressing relationships between countries.

Despite gripping speeches delivered about “the elephant poaching crisis” and the “unsustainable” levels of elephant mortality, and the fact that it is globally accepted that China is the single largest ivory consuming nation in the world, with an extensive and well documented legal and illegal ivory trade, there were no calls for China — or Thailand, also complicit in the ivory trade — to shut down their flourishing legal domestic markets for ivory. Incredibly, the specific roles of the two countries in fomenting the crisis was not even addressed.

The situation has been enabled by CITES parties themselves when they decided in 2008 to allow certain African countries to sell ivory to China in a “one-off” sale. A move which proved disastrous as it sent a strong signal to organized crime and poachers in the field that elephant ivory is a commodity of financial value to be traded.

Acceptance of the ivory trade is endemic in China, Vietnam and Thailand which are filled to the neck with illegal animal parts, with the police just walking by.

China’s illicit ivory trade has steadily grown in the last twenty years as the country’s emerging middle class has grown an appetite for luxury goods and ancient animal-based medicines. There are more tigers in tiger farms in China then there are in the wild. When asked to stop the practice of tiger farming, China legalized it.

The slaughter in Africa is increasingly in the world’s spotlight. Hopefully justice will prevail, the poachers will be caught and the message sent that the wanton slaughter of wildlife will not be tolerated.