Japan’s whaling season has turned out to be the least successful ever thanks to the efforts made by the Sea Shepherd Conservation Society during this year’s anti-whaling campaign Operation Zero Tolerance.

Of the 49 days this year spent hunting for whales, the Japanese “research” ships were forced to spend 21 of them avoiding the four Sea Shepherd boats. As a result the Japanese whalers returned home this year after killing just 103 minke whales of their stated goal of 935 and no humpback or fin whales out of their goal of 50 for each.

Adult minke whale and her calf being towed up the ramp of a Japanese factory processing ship in Antarctic waters in February 2008. (Photo: Australian Customs) 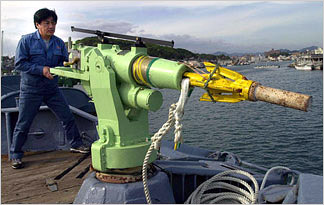 According to Sea Sheherd Captain Peter Hammarstedt, disrupting the activities of the whalers has meant “saving the lives of 932 threatened, endangered and protected whales.”

Anti-whaling activists are hoping the financial loss from this year’s low numbers will hasten the end of Japan’s whaling industry, heavily subsidized by the Japanese government including the use of funds designated for tsunami relief.

Australia filed a lawsuit against Japan with the International Court of Justice (ICJ) accusing it of violating the 1986 global ban, while the U.S., Australia, New Zealand and the Netherlands continue to call for an end to whaling.

The International Fund for Animal Welfare (IFAW) is calling on Japan to end the slaughter and instead turn to whale watching–a humane, sustainable and profitable alternative.

Commercial whaling is cruel and unnecessary. There is no humane way to kill a whale. Footage of previous Japanese whaling has shown whales taking up to half an hour to die after being shot with explosive harpoons.