The Humane Society of the United States assisted the Blount County Sheriff’s Office, Blount County SPCA and Horse Haven of Tennessee with the seizure.

Authorities seized 19 Tennessee Walking Horses from Wheelon’s barn, all suspected of having been subjected to soring—the application of caustic chemicals and painful devices to the hooves and legs of horses to cause the animals to lift their front legs in an unnatural gait called the “Big Lick.”

All of the horses confiscated were described as exhibiting visible signs of soring and being in extreme pain. Several were barely able to stand. Some had painful globs of hardened epoxy under their front hooves, which is akin to walking with a big rock in one’s shoe. Others had wrappings on their legs where the burning chemicals would “cook.” One equine expert said that you could tell the horses were in great pain by looking in their eyes which were dull instead of glossy.

Larry Wheelon is an active director of the Tennessee Walking Horse Trainer’s Association and sits on its ethics committee. He has been suspended by U.S. Department of Agriculture (USDA) inspectors at least 15 times for violations of the federal Horse Protection Act. He is also an AAA-rated judge with Shelbyville, Tenn.-based S.H.O.W, which stands for “Sound horses. Honest Judging. Objective inspections. Winning Fairly.” All of the USDA-certified horse industry organizations such as S.H.O.W. self-police their competitions.

Rescuer washes down the legs of Tennessee Walking Horse to ease the pain of burning chemicals. (Photo: Kathy Milani/HSUS)

Veterinarians and assistants worked into the night removing what is believed to be a mixture of kerosene and cinnamon from the animals. Officials said mustard oil may have also been used but are awaiting lab results from the swabs.

Despite the 1970 federal Horse Protection Act that outlaws the practice, soring is rampant in Tennessee where breeding and showing Tennessee walking horses is a multimillion-dollar industry. 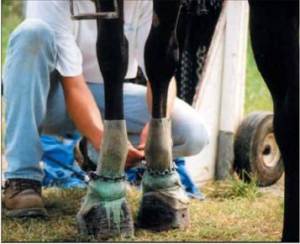 Several Walking Horse organizations in the state have actively battled efforts by the USDA, the Humane Society and other animal groups to curb the practice. Wheelon is the first to be charged under a new Tennessee law that makes horse abuse a felony punishable by one-to-five years in jail on each count.

The arrest and seizure were the result of an undercover investigation last year by the Humane Society of the United States (HSUS). An HSUS undercover investigation the previous year led to the arrest of acclaimed Collierville, Tennessee walking horse trainer Jackie McConnell, who has pleaded guilty to federal abuse charges and faces a July trial on 38 counts of animal cruelty.

This latest incident comes as Tennessee Gov. Bill Haslam considers an “ag-gag” bill that would ban long-term, undercover animal abuse investigations in the state by requiring investigators to turn their tapes over to police within days of recording them. The Humane Society investigation that netted McConnell took months.

Soring is one of many abuses perpetrated against animals that proponents of ag-gag laws are trying to cover up. Two days ago Animal Post spotlighted one such ag-gag proponent from Tennessee, lawmaker Andy Holt (R-Dresden) who accused the Humane Society of the United States of “using animals the same way human-traffickers use 17 year old women.” Holt referred to undercover animal cruelty investigations as “tape and rape.”