US Fish and Wildlife Migratory Bird specialist Bob Murphy and friend Dale Stahlecher, a wildlife biologist, were preparing for a canoe trip down the Rio Chama River, in New Mexico, when they spotted an Osprey dangling from a pine tree, 60 feet up.

Other canoeists, park staff, a local utility linesman and others joined in the rescue with contributions of equipment and belaying help for Murphy who climbed the tree and found the bird tangled in fishing wire. Stahlecker shot video while Murphy cut the bird loose.

They took it to The Wildlife Center in Española where the rehab staff found the wire had cut off circulation to one of the bird’s toes and it had to be amputated. 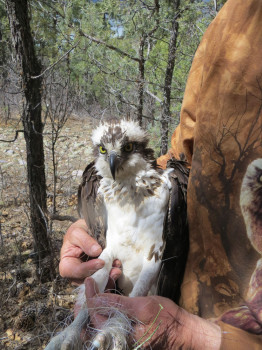 It’s unknown how long the bird may have been hanging in the air. Alissa Mundt, on the rehab staff, said “she could use a little bit of fattening up. She’s pretty skinny.” But she’s on the mend. It’s hoped she might be returned to the wild, but ospreys hunt by snatching fish swimming in water and carrying them away, and it’s difficult to know whether she will retain that ability. Mundt added that she thinks the three toes might be enough to help the bird survive on her own.