The keeping of exotic frogs as pets is apparently fashionable. The most popular are poison dart frogs, which come in kaleidoscopic colors. Frog-fanciers are said to collect them like stamps.

The golden poison frog, endemic to the Pacific coast of Colombia. (Photo: Wikipedia)

Poison dart frogs from the Dendrobatidae family are native to the rainforests of South America, particularly the country of Colombia, one of their last refuges.

A poison frog is not a pet you would want to touch. The amphibian’s skin is drenched in alkaloid poison. One frog contains enough to kill between 10 and 20 humans or a couple African elephants. People who have touched wild specimens directly have died.

There are no official figures on how many frogs are poached for pets each year, but it can’t be too many as there aren’t many of these bedazzled jewels left.

One species of Colombian dart frog has inadvertently evolved a perfect red circle in the middle of its back. This makes it the target of Japanese collectors keen to possess a creature that sports their national flag. 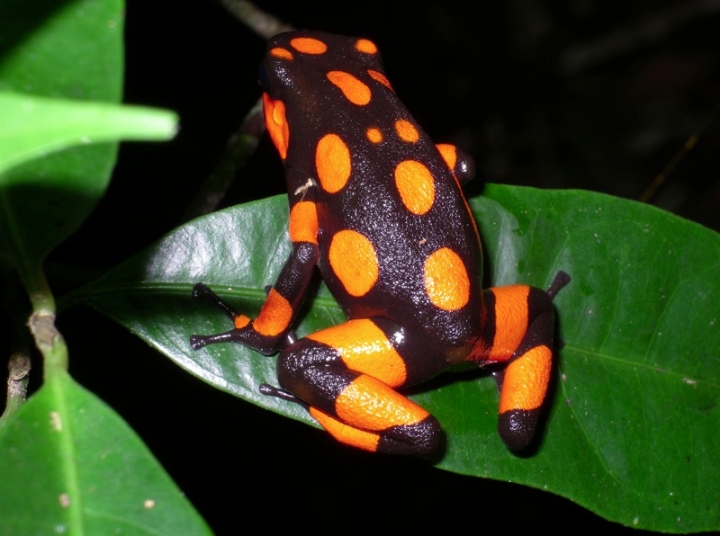 Colombia’s frogs are prized not only for their good looks. Their skin harbors a pharmacopoeia of chemicals that scientists have been studying as potential cures for everything from cancer to HIV. A Harlequin poison dart frog secretes a toxin that blocks neuro­transmission and could play a role in treating Alzheimer’s. A new morph (one of various distinct forms of a species) could contain the chemical blueprints for dozens of other medicines. Unsurprisingly, there is evidence an organized ring of frog-nappers is supplying the pharmaceutical industry which is interested in converting their poison into pharmaceutical drugs.

The harlequin poison dart frog has a variety of beautiful color morphs, which differ from one valley to the next in its native range. A never-before-seen morph can fetch thousands of dollars on the black market.

Poaching for the pet and pharmaceutical trade is the least of the dangers they face. More formidable is the threat posed by the

which has clobbered frog populations worldwide. Most devastating is the destruction of their habitats which are being destroyed by logging and pesticides.

The World Conservation Union (IUCN) lists seventy-nine species—thirty-eight percent of all of the species in the Dendrobatidae family—as being at some risk. Nineteen of the seventy-nine are considered Critically Endangered and facing an extremely high risk of extinction in the wild. Ninety-three others are listed as Data Deficient, which means that too little information is available to make a judgment about the threat of extinction.

The IUCN currently lists the poison frog as Endangered, noting its popularity in the pet trade and the loss of its habitat as likely causes for low numbers.