In the spring of 2012, a mortality signal on the radio collar of a Pacific fisher sent Hoopa tribal biologists scrambling to recover the animal quickly so a necropsy could be performed to determine cause of death. The field crew found the animal wasn’t dead but lethargic and lacking coordination, lurching on the ground attempting to seek cover from the approaching biologists. Beyond help the animal was humanely euthanized.

It was the sixth monitored fisher in California to die from rodent poison since 2009.

Necropsies and toxicological screenings of 58 fishers recovered on community and public lands in northern California revealed that nearly 80 percent of the animals had been exposed to rodenticide poisons.

Researchers suspected the poisonings were linked to marijuana grow sites hidden in the forest as the necropsied animals were not found near agricultural and urban areas where these types of pesticides are legally used to control pests. Their suspicions were confirmed when law enforcement officers who raided grow sites on public and tribal lands reported that marijuana cultivators routinely place pourable pesticides in open tuna or sardine cans to kill wildlife that damages their plants or raids their food caches.

This indiscriminate use of poisons in the wilderness has led to mass wildlife killings. Officers approaching one grow site discovered a black bear and her cubs seizing and convulsing as they slowly succumbed to the neurological effects of pesticides they’d just ingested.

More troubling, researchers’ data also showed that the fisher mortalities occurred from late April through early June, the prime-time for marijuana seedling planting and likely the period of heaviest toxicant use which is also a key time for female fishers to rear their kits. Several poisoned females left behind kits who died due to den abandonment and starvation.

of a poisoned fisher found by biologists.

Some of the fishers tested positive for multiple toxic compounds, many of which have been banned for use in the U.S., Canada, and the European Union. 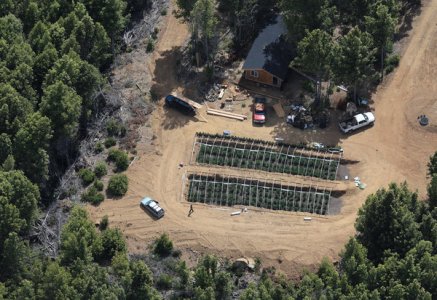 The environmental effects of the thousands of grow sites scattered across northern Califoria—tearing up of hillsides, grading the mountaintops, diverting whole watersheds and drying out creeks—is catastrophic, further imperiling salmon runs already devastated by water problems caused by logging.

A Google Earth virtual flyover of marijuana plots and the damage they cause can be seen here.