Recently released trail cam photos are evidence that a jaguar has been roaming the eastern flank of the Santa Rita Mountains in southern Arizona for at least nine months.

A jaguar prowls the mountains at night on the eastern flank of the Santa Ritas Mountains, southeast of Tucson. (Photo: USF&W)

Since October, remote cameras have photographed the cat on seven occasions in five different locations. Three of the photos were taken close to the site of the proposed Rosemont copper mine in the Sky Island wilderness, raising the stakes as to whether the mine will be granted a permit.

This is the only jaguar currently known to be extant in the United States. But the cats are no strangers to the area. In February, 2006, in the Animas Mountains, animal guide Warner Glenn photographed a jaguar that his dogs had chased into a big cedar tree. “He did not run,” Glenn said. “He was not afraid of anything.” Later he estimated that the jaguar, by the look of his teeth, was eight or nine years old and weighed nearly 200 pounds. Glenn named the cat Border King. 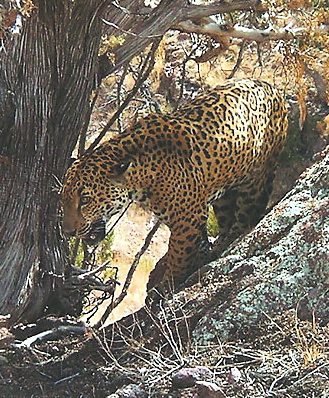 Despite photo evidence proving the presence of jaguars in the area, the USF&W dragged its feet developing a recovery plan for the cat as required under the EPA. Indeed, if jaguars were found it would open up the possibility that federal land would have to be put aside as “critical” jaguar habitat, something people in the livestock industry who range their cattle for next to nothing on federal land are dead set against.

In 1997, the Arizona Fish and Game Department (AFG), with a wink and a nod to the local cattle industry, created the Jaguar Conservation Team (JCT), to “identify” and “protect” jaguar habitat,” believing that no cats would be found, thereby forestalling any usurpation of grazing land.

Before long, remote cameras identified a cat which the JCT team dubbed Macho B. In an attempt to appear it was actually doing something meaningful, the team made plans to capture it and affix a radio-collar. Conservationists warned of the potential risks and questioned the purpose of such a plan and how it fit into protecting the big cat’s future. Non-intrusive methods of research were available, but the Jaguar team swept both objections and suggestions aside. They were dead set on capturing a jaguar. Yet, as an endangered species, to make capturing a jaguar legal, USF&W first had to issue a permit authorizing such a “take.”

On February 18, 2009, AFG biologists found Macho B captured in a wire snare. The snare had been set by biologist Emil McCain, who was working as a subcontractor for the department capturing mountain lions and bears for radio-collaring. Ostensibly, snaring a jaguar was a happy accident. The biologists tranquilized, radio-collared and released the cat.

Twelve days later, after he did not move as far or as frequently as expected following his capture and after he was observed ailing, Macho B was re-captured, diagnosed as terminally ill from kidney failure, and euthanized. 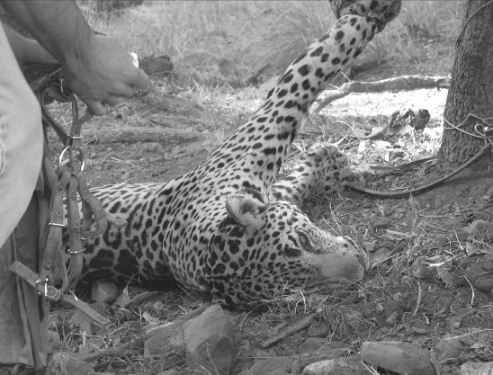 Arizona Fish and Game said the capture was accidental, occurring as part of a bear-lion study. The Center for Biological Diversity called for an independent medical investigation, which revealed that the jaguar’s death was at least in part due to agency mismanagement.

Investigating Macho B’s death, the Interior Department’s inspector general concluded that AFG did not have a permit for the capture, and stated that skinning the jaguar to preserve the pelt, undertaken instead of a necropsy because a USF&W supervisor was unfamiliar with the word “necropsy,” resulted in loss of information and left doubt as to what had ailed Macho B.

Although the entire corpse was not made available for a necropsy, some organs were preserved. A veterinary pathologist who examined the jaguar’s kidneys, but whose report was never released, told the Arizona Daily Star that the organs appeared healthy and that Macho B may have just suffered from dehydration.

In May, 2010, Emil McCain admitted in federal court that he deliberately and without a permit captured Macho B by baiting a snare set in a canyon that he knew Macho B traversed and pleaded guilty to a misdemeanor crime: illegal take of an endangered species. (McCain had convinced a female co-worker to plant the bait, and she was sentenced as well.) McCain said he knew there had been recent evidence a jaguar had appeared in the area of the snares as photographs of the cat had been taken near the capture site months earlier. He was sentenced to five years’ probation and fined $1,000.

Twelve years after it was created, and with little else to show for its efforts, the Jaguar Conservation Team and its powerbroker the Arizona Fish and Game Department, had killed, for scientific purposes but absent the rigor of real science and outside the constraints of federal law, the last known wild jaguar in the United States.

Now there is another. 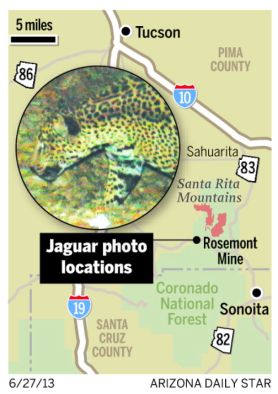 The photos of the new cat were released as USF&W and the Forest Service are wrapping up a draft biological opinion regarding the proposed Rosemont copper mine’s impacts on the jaguar and nine other federally protected species.

The biological opinion is supposed to examine measures that can ease a project’s impacts on an endangered species. In an earlier biological assessment, the Forest Service wrote that the mine is “likely to adversely affect” the jaguar.

Despite the cat’s presence the Arizona Fish and Game Department remains opposed to designating the area as jaguar critical habitat, citing lack of evidence of a breeding pair.

The jaguar’s continued presence in the Santa Ritas and elsewhere in the “Sky Islands” mountain ranges of Southern Arizona shows that jaguars belong in this region and underscores the need to protect their critical habitat, said Sergio Avila, a large cat biologist for the environmentalist Sky Island Alliance.

Oddly, or perhaps not, the Arizona Daily Star needed a Freedom of Information Act request to obtain the photos.