Three years ago, wildlife biologists from the Texas Parks and Wildlife Department drove into the paddock of James Anderton’s Whitetail Ranch hunting reserve. Using rifles mounted on tripods they killed more than 70 of Anderton’s animals, shooting for hours, working the panicked herd back and forth across the paddock, picking them off one by one.…. 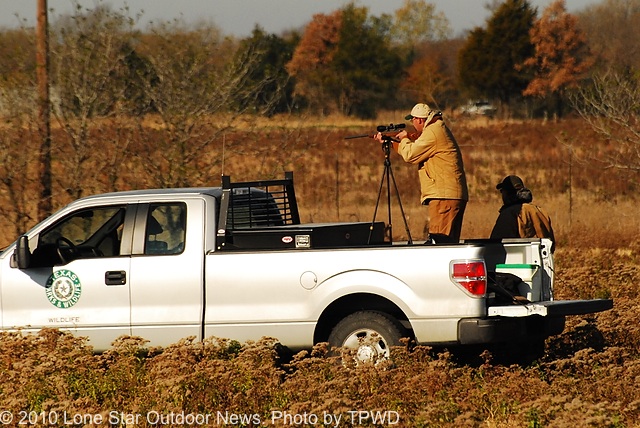 A sharpshooter with the Texas Parks and Wildlife Department guns down deer at the Anderton Whitetail Ranch in 2010.

A white helicopter with what appeared to be a forward-looking infrared camera mounted to its nose flew lazy loops over the ranch, scanning for survivors.

Texas wildlife officials were concerned that animals in the herd might be carrying a highly transmissible killer of deer known as chronic wasting disease (CWD).

Anderton said the deer had been bought in Arkansas, a state with no documented cases of the disease so far. But he couldn’t provide evidence of the state of origin for every animal because he was locked in prison for wildlife trafficking. The FBI and Texas Department of Public Safety had evidence that he was trucking deer in from out of state as well as capturing wild deer.

Because CWD can be diagnosed only through autopsy, the agency concluded there was only one way to insure the animals didn’t present a disease threat: kill the entire herd. 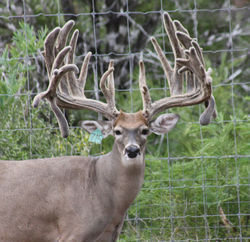 is big business in Texas. Breeding deer with giant antlers pays off in the sale of semen and fees hunters pay to walk into a compound surrounded by high wire fence and shoot them. The fee for a prize buck ranges from $7,000 to $25,000. Proponents of the industry say it’s a business that’s keeping failing cattle ranches alive.

The industry is growing. TPW officials say the number of game ranches is increasing along with the number of animals they’ve had to kill for wasting disease testing. In 2011 Texas wildlife agents killed almost 600 deer.

has been detected in wild populations in 22 states and in 50 different breeding farms. Little understood by researchers, the only means of controlling it is quarantine and the preemptive slaughter of deer like Anderton’s

Test results showed Anderton’s deer were free of the disease.

Anderton is suing, claiming the agency violated his constitutional rights by depriving him of property without due process. The complaint poses the legal question of whether the deer are considered wildlife, and thus the property of Texas? Or are they livestock belonging to Anderton?

If TPW is ordered to compensate the him for the deer they shot, it would signal a fundamental shift in the concept of wildlife as an irrevocable public trust.