With release of the new documentary Blackfish it seems like a good time to revisit a piece posted here last fall depicting the inhuman practice of imprisoning orcas for exhibition.

Life as Lolita knew it ended 40 years ago.

In the waters off Washington State in the summer of 1970, hunters using speedboats and explosives herded more than 60 orcas from Puget Sound’s J, K and L pods into a three-acre net pen in Penn Cove off Whidbey Island. They lassoed adolescents ranging in age from 2 to 7 and separated them from their mothers. Local residents reported the air was thick with the sound of screaming whales thrashing in the tangled nets and fluke slaps which could be heard across the inlet. One mother orca drowned desperately trying to reach her infant through the twisted nets. Her body was later discovered by reporters.

Four youngsters also died in the assault. Their deaths were kept from the public. At night their bodies were weighted and hauled out to sea and sunk.

Seven of the surviving youngsters were hoisted onto boats, towed to a dock and put on flatbed trucks. The call went out to aquariums around the world proclaiming there were whales for sale in Puget Sound. It was the largest whale capture in history. 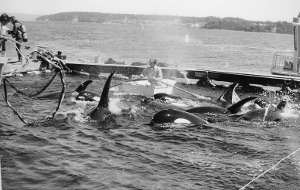 Two of the orcas went to Japan, one each to Texas, Australia, The UK, and France, and one 6-year-old female from L pod, wound up at Miami Seaquarium in Florida, where she became Lolita, the Killer whale. 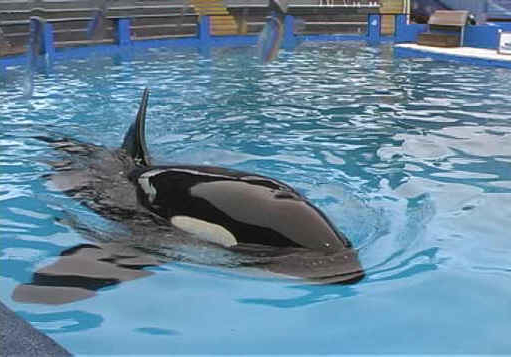 When not performing, Lolita is confined to a tank barely larger than she is. (Photo: Slaveforentertainment.com)

When Lolita is not performing she is left to swim in her tank by herself. The tank is not a reasonable habitat for a whale. She is 22 feet long and weighs about 8,000 pounds. From the front wall of her pool to the concrete barrier that spans the middle of the pool is only 35 feet. At its deepest the pool is just 20 feet. Orcas in the wild swim an average of 80 miles a day.

Killer whales are highly intelligent and social beings that have close bonds with pod members. Years ago another whale was briefly housed with her but died in the tank. Lolita has been without a companion since 1980.

Cetacean lovers for decades campaigned for her release, and often protested outside the Miami Seaquarium. In the 1990s, Washington Gov. Mike Lowry demanded that the marine park return the whale to Puget Sound.

In 2005, Puget Sound orcas were listed under the Endangered Species Act (ESA), but the National Marine Fisheries Service exempted orcas currently in captivity from the listing.

A lawsuit was filed in December, 2011, in U.S. District Court in Seattle seeking to force Lolita’s release under the Act.

Whale activists contend that keeping a highly social animal like an orca in a tank should be viewed as harassment, and the ESA makes it illegal to “harass, harm, pursue, shoot, wound, kill, trap, capture, or collect” an animal under its protection.

Lolita has been in her tank for 40 years. Surely it is time for her–and Tilikum and the 44 other orcas in captivity–to be retired.