Mexico appears to be doing little or nothing to enforce changes in its Gulf of Ulloa fishery to protect the loggerhead sea turtles that migrate from their nesting grounds in Japan across the Pacific Ocean to the Baja California Peninsula.

The loggerheads stay in Baja for decades as they grow and mature, feeding primarily on red crabs. In the last few years the crabs have become a huge fishery and thousands of gillnets are now stretched across Baja’s Pacific coastal waters; “walls of death” that are snaring and drowning  vast numbers of turtles.

Mexican government officials last week reported that so far this year 705 loggerheads have stranded dead along a 30-mile shoreline in Baja California’s Gulf of Ulloa. Last year, scientists estimate over 2,000 loggerheads were killed there in gillnets.   Last summer in the Gulf saw a 600% increase in turtle deaths. Needless to say, the enormous bycatch is jeopardizing the turtles’ survival. 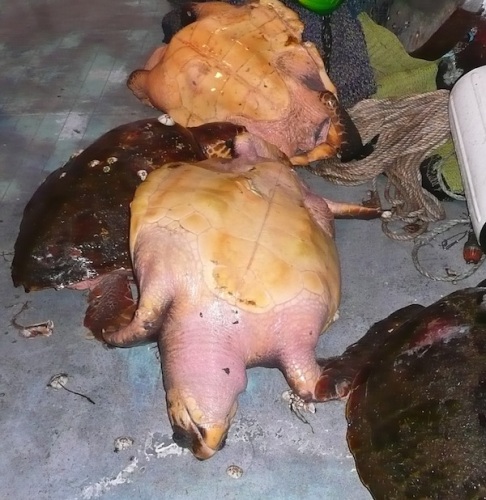 Nets have been developed that can solve the bycatch problem but Mexico has shown an unwillingness to act to insure that the fishery utilizes these measures.

Rather than embrace a solution, the Mexican government has chosen to appease the fishing industry by ignoring and misrepresenting the findings of its own scientists who have pointed to bycatch as the leading cause of the deaths.

Conservation groups are proposing that the United States consider a ban on the import of fish and other wildlife products from Mexico under trade agreements that authorize sanctions against countries that allow excessive bycatch of U.S.-protected species, like loggerhead sea turtles.

Shout out: Center for Biological Diversity.