The recent mass poisoning of elephants in Africa is a reminder that such mindless brutality is anything but rare.

Last January, rangers of the Gunung Rara Forest Reserve in Northeastern Borneo came upon a baby pygmy elephant, nudging his dead mother, trying to get her to rise and feed him. Four other members of his herd lay on the ground nearby.

The rotting carcasses of six other members of the herd had been found earlier that month.  Four more were found in the days to come. Initial autopsies revealed they were all suffering from severe bleeding and gastrointestinal ulcers, indicating they had been poisoned.

Unlike elephants poached for their tusks, these animals were killed because they posed problems for palm oil plantations which are gobbling up many of the country’s forests.

Poisoning of elephants in Borneo has become routine. Every year, at least a dozen elephants are found either poisoned or shot dead across Sabah’s elephant home ranges, particularly in districts where forests have been fragmented by large scale agriculture activities and plantations.

The herd had been staying at the edge of a rainforest reserve, close to a logging camp and oil palm plantations, land controlled by Yayasan Sabah, the state wood and palm oil group. The elephant family’s territory covers around 400 square kilometers and is being taken away from them.

Like orangutans, elephants love to eat palm tree fruits, which puts them in continual conflict with plantation workers.

Later chemical analysis of the elephants’ remains confirmed that their bodies contained high levels of heavy metals: arsenic, cadmium, iron and chromium. These metals are usually found around mining, smelting or waste disposal operations. As there is no such activity in the area, wildlife officials to believe the toxic substances were deliberately placed near the elephants’ feeding ground with the intention to kill them. 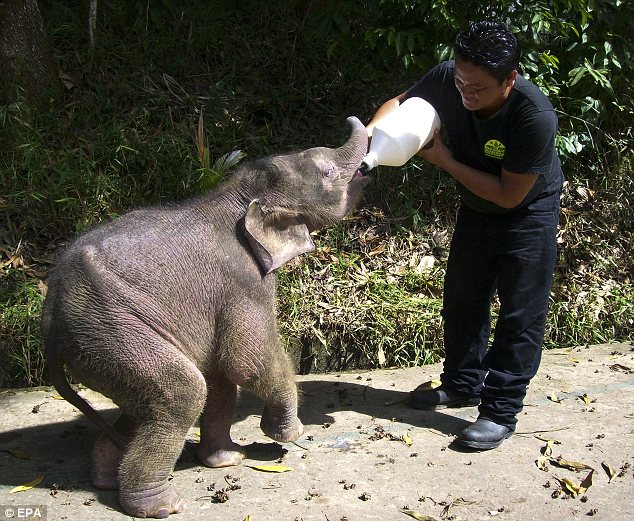 The baby was taken in by the Lok Kawi Wildlife Park. Now named “Kejora” or “Joe” for short, the calf appears to be healthy. He has gained weight and is now socializing with other elephants at the park..

Policymakers in Malaysia are in the process of clearing the last remaining rainforest areas in the states of Sarawak and Sabah for more plantations, as the country continues to rely on the export of tropical timber and palm oil.

The deforestation is being driven by Sabah Chief Minister Musa Aman, who personally grants permits for the clearing of the rainforest and for the establishment of palm oil plantations. Aman is also Chairman of the Board of Trustees of the state-owned Yayasan Sabah Group, which is scouring tens of thousands of hectares of rainforest for the new palm oil plantations.

The World Wildlife Fund estimates there are fewer than 1,500 Borneo pygmy elephants. Known for their babyish faces, large ears and long tails, they live mainly in Sabah and grow to about 8ft tall, shorter than mainland Asian elephants..

The future for Sabah’s elephants remains a question mark because 75 per cent of their territory lies in unprotected forest.

There have been no arrests in the poisoning of the 14 elephants.