The IUCN has just listed the okapi as Endangered, only one step away from the highest risk of extinction, Critically Endangered. 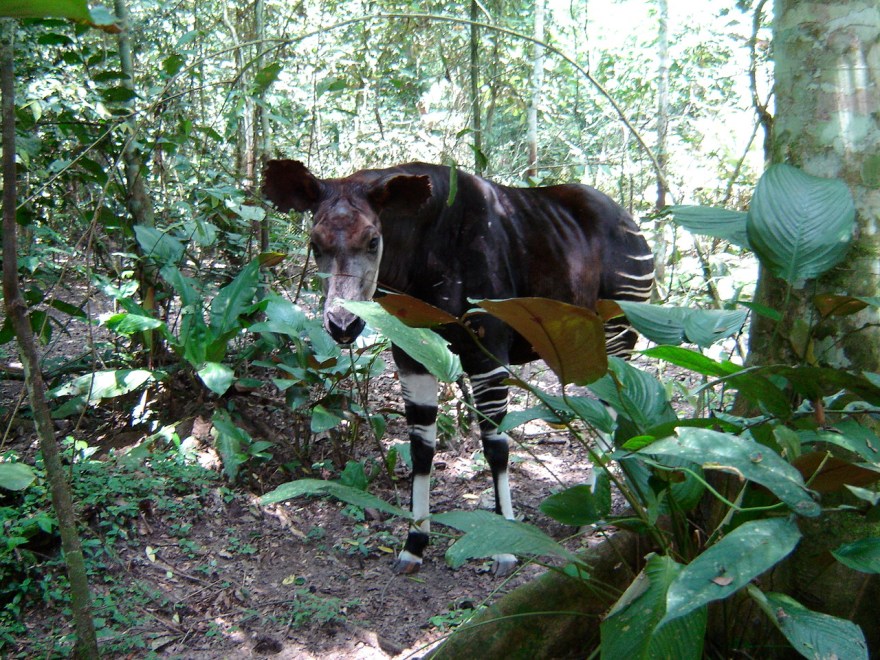 Okapi in the forest in DR Congo.

The animal wasn’t recognized by the western scientific establishment until brought to their attention by Sir Harry Johnston in 1901. I wrote about how the okapi got its (Western) name in Anatomy of a Beast:

Sir Harry Johnston…made a career in Africa during the reign of Queen Victoria. In his Book of Great Jungles, biologist and nature writer Ivan Sanderson devoted several pages to Sir Harry whom he viewed as the forerunner of a new guard of explorer: the naturalist. “Johnston went to ‘the dark continent’ on a shooting trip in 1882,” Sanderson wrote, “and stayed simply because he wanted to paint pictures and see the country, not explore for new routes or opportunities for trade.”
Against a legion of naysayers, Johnston became the first Westerner to “discover” the Okapi, an odd horse-sized mammal that resembled somewhat a zebra but shaped more like a giraffe. The reigning scientists in London finally had to admit his success when he presented them a skull and hide from the animal, which they hurriedly named Okapia johnstoni. Sir Harry collected animals for the London zoo and had his own zoological garden at home. Several of his pets accompanied him on his expeditions and, no matter the equatorial weather, he always dressed for dinner.

The elusive giraffe-like forest creature is one of the oldest mammals left on earth and nearly impossible to observe in the dense tropic forests because its sense of hearing and smell are extremely acute.

Armed conflict, human settlement, deforestation and poaching have reduced the okapi’s numbers to approximately 10,000 to 15,000 animals in the wild, down from an estimated 40,000 a decade ago.

Their last redoubt is the Okapi Wildlife Reserve in a 13,700-sq-km tract of the Ituri Forest in northeastern Democratic Republic of the Congo (DRC). Over 40% of the okapi left on earth live in and around the Reserve where the Okapi Conservation Project (OCP) works with ICCN rangers (the Institute in Congo for the Conservation of Nature) and local communities to protect the biodiversity of the Ituri Forest.

15 okapi among the victims killed in raid on the Epulu Breeding and Research Station, Democratic Republic of Congo.

Last September (ANIMAL POST “Men with guns” September 8, 2012), MaiMai Simba rebels, led by an elephant poacher known as Morgan, armed with AK-47 rifles, invaded the reserve’s Epulu station killed seven park staff and their family members and took others hostage. They destroyed the reserve’s infrastructure and, in a final brutal act, killed the station’s 15 okapi, who were serving as a reservoir for the infusion of new genetic stock into okapi populations in global conservation programs.

Over a year later, security and peace has begun to return to Epulu with the armed militias being run out of the Okapi Wildlife Reserve. However, the militia that conducted the raid, including its leader Morgan, remain at large.

For an update on the reserve and the okapi go here.

For more information or to donate, visit the Okapi Conservation Project.