Zoos are an iffy proposition in many ways but there are also upsides. 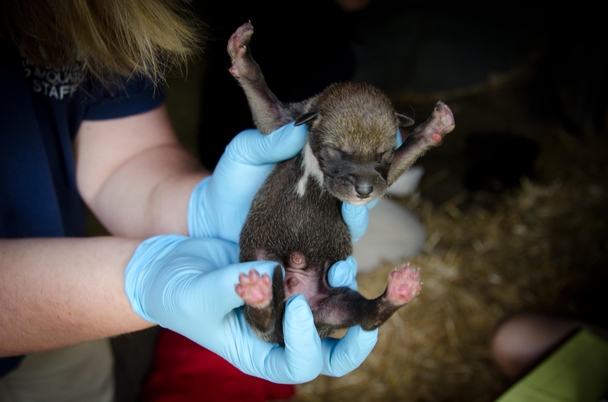 One of a litter of 8 red wolves born at the Point Defiance zoo in Tacoma, Washington.

Once common from Texas to Pennsylvania to Florida, red wolves have been hunted trapped and poisoned almost to extinction. The wild population today numbers about 100, making them one of North America’s rarest mammals.

One of six red wolf pups recently born at the NEW Zoo in Green Bay, Wisconsin.

To pump fresh blood into the wild population, several zoos across North American, such as the Point Defiance zoo in Tacoma, Washington and the Chicago zoo, operate red wolf breeding programs. After the zoo born pups pass a health check, U.S. Forest Service biologists slip them into the litters of wild females who raise them as their own.

Red wolf pups born at the Chicago zoo are introduced into the wild. (Photo: US Forest Service)

Smaller than gray wolves, red wolves are known for patches of reddish fur behind their ears and on their necks. It is illegal to shoot a red wolf but they are regularly shot by hunters who generally claim to have mistaken them for coyotes.