From a photographer in the heartland.

“Quick story from last night. I had just gotten back to the front lines after the medics treated me for getting tear gassed…the first time. 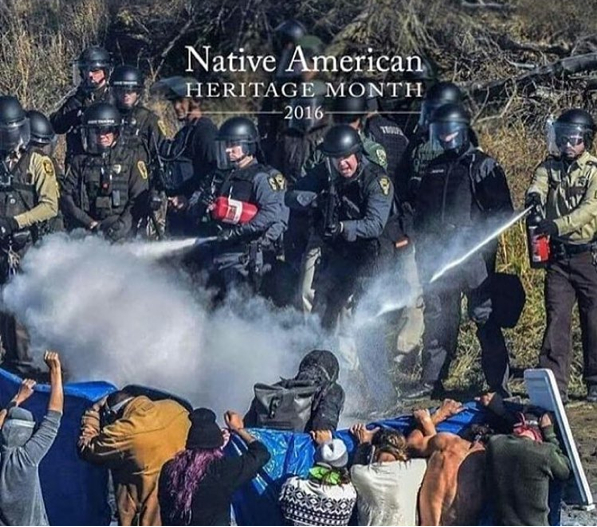 As I’m framing up a shot of the riot police lineup through my viewfinder, I hear a loud pop in the distance. The woman standing beside me, probably half my size, goes down hard. I thought she slipped on the ice (the pavement had frozen by that point due to hours of being sprayed by law enforcement’s water cannon in 20 degree weather). She wasn’t responding. It wasn’t until I found this next to her body that I knew she didn’t slip – she was shot. Moments later, she woke and became hysterical – rightfully so. Turns out, the 40mm sponge round got her right in the head. THE HEAD. As the volunteer medics pulled her away through the chaos, I looked in the direction where the shot came from. There I saw him, a cop with full face head gear, holding the riot gun that took the woman out. I couldn’t see his eyes, but I know he saw mine. He raised his hand, and started shaking his finger at me. It was in that moment that I realized he actually missed his shot, because that round was meant for me. Another photographer asked if I was alright. I told him what happened, and he wasn’t surprised. He revealed that press working alongside the ‘Water Protectors’ have been targeted by law enforcement since day one of the movement. They’ll arrest you, “lose your memory card” in jail processing, and your story’s gone. Or the quick version, try taking me out with a 40mm sponge round from a riot gun. A cop who’d rather see me be knocked unconscious than to publish a story – I’ll be honest, it shook me to my core. The only problem for him, it just validated how important this story really is. And because of that, I’ll continue telling it to the best of my ability. A word of advice to the next guy who tries to take my ass out. Save your ammo, because my shot will always be more powerful than yours.”