Thanks to mythical claims of its medicinal value in traditional Asian remedies, rhino horn has become an incredibly valuable commodity at some $45,000 per pound.

Heightened demand for horn has had stark consequences for the recovering rhino populations of Zimbabwe which has seen 300 dead rhinos because of poaching over the last 5 years. To try and halt the slaughter, conservationists have added de-horning to their toolkit. The following photos were taken on the Chishakwe ranch.

A spotter plane locates the rhino and passes the location to a ground crew. Once the ground crew is in place a chopper is called in.

A vet darts the rhino from the chopper and the ground crew drives to the downed animal. The vet quickly moves in to keep a close watch. Speed is paramount.

The darted animals are blindfolded to avoid distraction which can stress them, and propped-up so the 8,000 pound beasts are not lying heavily on one side which might affect their circulation. They are sprayed with mist to keep them cool. The upper horn is removed with a chainsaw, leaving a ‘bed of horn’ to ensure that no pain is caused.

Not as painful as it looks. (Photo: LJ Campbell – Chishakwe Ranch)

Grooves are cut in their toe nails to make it easier for trackers to find them in the future to check their condition. The ears are notched and tagged so that individual rhino is unmistakable.

Finally the rhino is marked with paint so that they can be spotted easily from the air during the operations period. 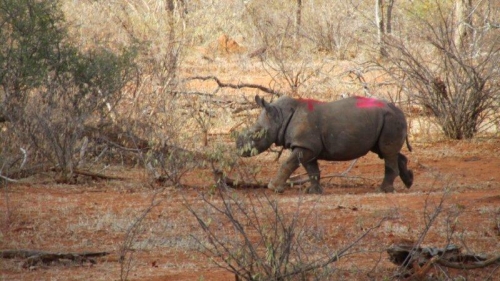 Dehorning is part of a desperate multi-pronged strategy to conserve the country’s vanishing rhinos that includes scouting patrols on the look-out for poaching activity, a crack anti-poaching unit to confront and arrest poaching gangs, as well as efforts to make the growing of rhino populations more beneficial to local populations.

Chishakwe ranch is part of a group of conservation ranches found in the Save Valley Conservancy which has responsibility for conserving rhinos across 1.3 million acres of southern Zimbabwe. The de-horning is done by the LowVeld Rhino Trust.