Hare coursing, in which dogs (usually Greyhounds) compete with one another to hunt down a wild hare that has been released into an enclosure, has been banned in Scotland since 2002, in England and Wales since 2005, and in Northern Ireland since 2010, but continues in the Republic of Ireland under an exemption from anti-cruelty laws introduced in 1911. The exemption was retained in an updated draft animal health and welfare bill published in March of this year.

Every professional opinion poll conducted since 1978 on attitudes toward hare coursing in Ireland has shown that a substantial majority of Irish people favour its abolition. But the current Fine Gael and Labour ruling coalition, representing the two largest Irish political parties, appears unconcerned about the polls. 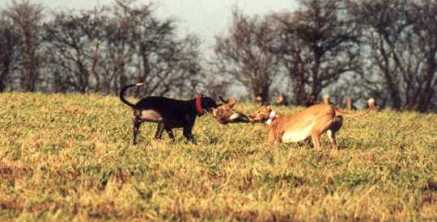 Two greyhounds with a hare (Photo: League Against Cruel Sports)