tried unsuccessfully 2 days ago to block the transfer of the carcass of a harpooned female minke whale from one Japanese vessel to another in Australian waters off Antarctica near the country’s Davis Research Base. The irate whalers tried to ram the Sea Shepherd boat.

“Through binoculars we could see the whale breaching,”

said a crewman aboard a Sea Shepherd boat. “We saw the harpoon fire, the cable tighten. Then it was several minutes before she stopped thrashing about.”

The harpooning occurred deep inside the Australian Antarctic Exclusive Economic Zone, which is a designated whale sanctuary, but is not recognized by Japan. 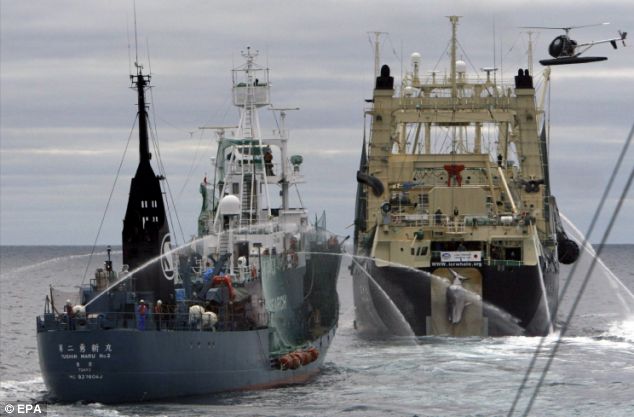 (circa 2008) A helicopter from the protesters’ ship hovers over the Japanese factory whaling ship the Nisshin Maru as it hauls a minke whale up its slipway. Meanwhile the Yushin Maru No. 2 sails close behind to protect the catch.

said the country was opposed to whaling wherever it occurred, but particularly in a whale sanctuary. “That’s why we have taken Japan to the International Court of Justice.” Burke has rejected the call to send an Australian vessel to the area. He says the focus should not be just on whether the whale was killed in Australian territorial waters, but on the issue of whaling itself. “It doesn’t matter what part of the ocean it is. In Australia’s view, it is just as illegal,” he said. 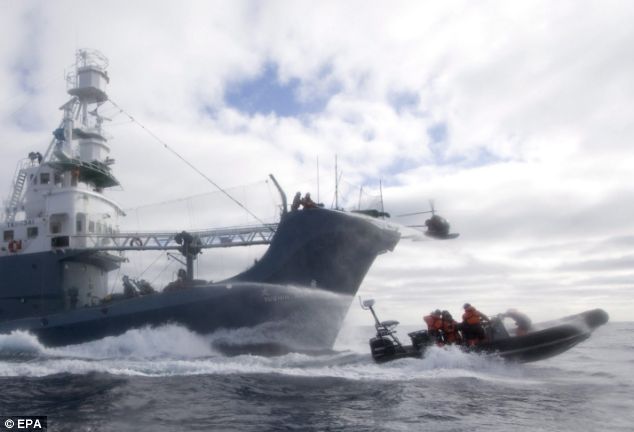 in a 1986 global moratorium on commercial whaling that allows “lethal research” on whales and sets out to kill hundreds each year. The country makes no secret that the meat ends up on dinner plates and has pushed for a resumption of full-fledged commercial whaling, accusing Western nations of insensitivity to its cultural traditions.

Adult minke whale and her calf being towed up the ramp of a Japanese factory processing ship in Antarctic waters in February 2008. (Photo: Australian Customs)

came despite a United States court injunction on the Washington state-based Sea Shepherd Conservation Society (SSCS), against attacking the whalers, or approaching within 500 yards. 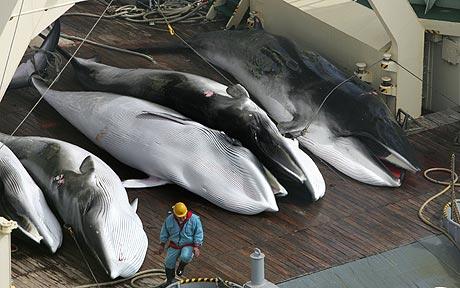 Japan’s Institute of Cetacean Research has begun a contempt action against SSCS over an alleged breach of the injunction. The activists argue that control of the anti-whaling campaign is in the hands of Sea Shepherd Australia, and out of the U.S. court’s jurisdiction.

The Japanese whaling industry is struggling

after several years of militant activists scuttling the catch and a lower demand for whale meat. The Japanese government is being forced to prop up its whaling program with taxpayer-funded subsidies.

is a non-profit conservation organization whose mission is to end the destruction of habitat and slaughter of wildlife in the world’s oceans in order to conserve and protect ecosystems and species. SSA uses innovative direct-action tactics to investigate, document and take action when necessary to expose and confront illegal activities on the high seas. By safeguarding the biodiversity of our delicately balanced oceanic ecosystems, SSA works to ensure their survival for future generations.