are removed from their mothers immediately after birth and kept in total isolation. Deprived of their mothers’ protection and comfort, each infant is exposed to multiple frightening experiences, including a live kingsnake. When the infants are about one year old, they are killed and their brains dissected.

If this sounds like something out of the middle ages, you would be wrong. It is the latest in a long line of similar experiments being conducted at the University of Wisconsin.

Chair Department of Psychiatry at the University of Wisconsin School of Medicine and Public Health, has coauthored approximately 180 published scientific papers most of which have involved experimentation on animals. Go HERE for a short list of some of his studies.

As regards his newest “maternal deprivation” project, “Effects of early experience on the development of anxiety and its neural substrate,” Kalin says that he has gone as far as he can in his study of anxiety in “normal” monkeys. Now, he must study fearfulness in monkeys taken from their mothers almost at birth and compare it to the fearfulness of monkeys allowed to stay with their mothers for a few months.

Kalin will kill 40 male monkeys in his experiment when they are 61 to 70 weeks old. He will cut out parts of their brain and report on any differences he can identify.

Over the past 18 years, Dr. Kalin’s research using monkeys to study the neurobiology of fear has cost taxpayers many millions of dollars. In the past ten years alone, it has cost us $5,075,798. [National Institutes of Health. Grant R01MH046729. Development and Regulation of Emotion in Primates.]

Kalin’s experiment is all the more macabre because it follows in the horrific tradition of tests conducted years ago by the infamous Harry Harlow, a psychology professor–at the same school–who rose to prominence by physically damaging the brains of rhesus monkeys then testing their learning ability. 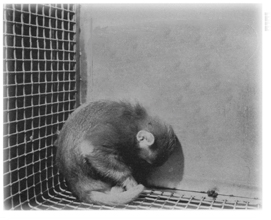 Harlow’s maternal deprivation tests consisted of taking baby monkeys from their mothers at birth and putting them in cages with surrogate mothers made of cloth and wire. He concluded what one would assume without any study at all—that social creatures can be destroyed by destroying their social ties.

Many psychologists continue to hold Harlow in esteem as a major figure in experimental psychology.

When challenged about the value of his work, Harlow stated: “The only thing I care about is whether a monkey will turn out a property I can publish. I don’t have any love for them. I never have. I don’t really like animals. I despise cats. I hate dogs.”

Harlow’s studies became increasingly pathologically disturbed. In the late 1960s he invented a device he called the Well of Despair, a stainless-steel trough with sides that sloped to a rounded bottom and a covered top, equipped with a food box and a water-bottle holder. Into the box he placed monkeys between the ages of three months and three years, who had bonded with their mothers for up to ten weeks, and left them alone. The aim of the research was to produce an animal model of clinical depression. Unsurprisingly it worked. The monkeys would spend the first day or two trying to climb up the slippery sides. After a few days, they gave up. They stopped moving about and spent most of their time huddled in the bottom. They were found to be psychotic when removed. Most did not recover.

Social isolation and maternal deprivation experiments at UW-Madison continued through the 70s and 80s. These types of experiments have not been used at the University for over twenty years. So one wonders: Did the ethical problems raised by Harlow’s experiments not register with the researchers there at all?

There is no justification for doing this to any creature. Conducting such tests in this day and age is morally indefensible.

The University of Wisconsin’s Institutional Animal Care and Use Committee (IACUC) and ask them to cease these cruel and unethical experiments.

FOR ATTENDEES OR ALUMNI OF A UNIVERSITY OF WISCONSIN SCHOOL:

Add your name to the pledge to withhold all donations to the University of Wisconsin until the institution bans the use of maternal deprivation once and for all.