Over a two-day period a week ago, heavily armed poachers on horseback slaughtered 89 elephants near Tikem on the southwest border of Chad and Cameroon. At least 30 of the animals were pregnant. Among the victims were 12 calves.

Believed to number as many as 50, the poachers are now believed to be heading to an area closer to the border of Cameroon where upwards of 800 elephants remain unprotected.

There are no reports of arrests. The massacre comes on the heels of a recent slaughter of elephants in Cameroon, which left 28 elephants dead.

The killings may have been seen as offering some sort of relief to local farmers who are unable to protect their crops and livelihoods randomly being damaged by elephant herds simply looking for food.

The ivory will most likely be illegally exported to Thailand or China, where it is used to make jewelry, figurines, and souvenir trinkets.

Against this background of wanton slaughter, the Convention for International Trade in Endangered Species (CITES), which recently ended its global summit in Bangkok, pulled its punches in dealing wtih the illegal ivory trade. China, Thailand, Vietnam, Philippines, Malaysia, Kenya, Tanzania, and Uganda were ordered to submit detailed plans to stop the ivory trade in two months and to “make progress” towards these goals by the summer of 2014. Most egregious was CITES’ failure to put sanctions on the nations in central Africa where the heaviest poaching is occurring, including Gabon, Cameroon, Republic of the Congo, and the Democratic Republic of Congo (DRC). 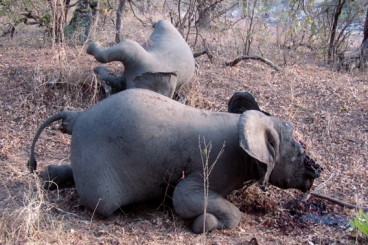 Rosalind Reeve with the David Shepherd Wildlife Foundation spoke for the majority of conservation organizations in saying that CITES’ “failure to combat the fundamental driver of the killing amounts to gross international negligence.”

The booming illegal ivory trade is decimating the world’s elephant population. A single park in Gabon, Minkebe National Park, has seen 11,100 forest elephants killed in the last eight years; Okapi Faunal Reserve in the Democratic Republic of the Congo has lost 75 percent of its elephants in fifteen years; and a new study in PLoS ONE estimates that in total 60 percent of the world’s forest elephants have been killed in the last decade alone.

CITES has sent contradictory messages on elephants by allowing one-off sales of ivory in the past that fueled demand and spread confusion about the legality of ivory in general.

One of the few bright spots for elephants came during the first day of the meeting when Prime Minister Yingluck Shinawatra pledged to end the legal ivory trade in Thailand. Currently ivory is sold domestically in the country where, experts say, it is most often bought by foreign tourists. Her declaration came after the delivery of petition signed by nearly 1.5 million people.

A monk at Wat That Thong temple in Bangkok prays for the tens of thousands of elephants poached annually. (Photo: World Wildlife Fund/WWF Thailand)

During the CITES conference, Buddhist leaders in Bangkok prayed for slaughtered African elephants.

China, where much of the illegal ivory ends up and therefore bears the main responsibility for the poaching crisis, continues to hide behind a facade of denial and has done nothing to stop the slaughter.