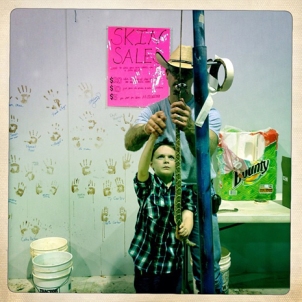 A young boy learns how to skin a rattlesnake. The handprints on the wall are made with snake blood. (Photo: Matt Eich/New Yorker)

The magazine characterized the event thusly: “At the roundup, held each year since 1958, thousands of wild rattlesnakes are captured, sold, displayed, and, often, killed as part of the week’s events.”

A Sweetwater Jaycee prepares to milk a rattlesnake in front of a captive audience. (Photo: Matt Eich/New Yorker) 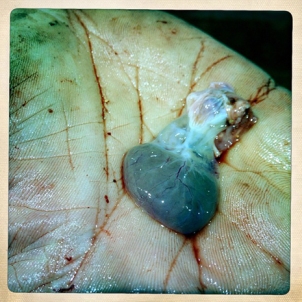 A man holds a still-beating rattlesnake heart. The hearts can continue to beat for up to an hour after being removed if kept moist. (Photo: Matt Eich/New Yorker)

Not a word expanding on the the fact that this fabulous Texas tradition might be a disaster for another of nature’s endangered animals. (See: ANIMAL POST/”The Eastern Diamondback,” January 31, 2013.)

Apparently, the magazine figures this is simply another quirky example of homespun Americana.

Somehow, New York, home to America’s major media, often just doesn’t get it. The New York Times, the most influential paper of all, has a long tradition of avoiding environmental reporting whenever possible and would prefer to drop coverage of issues related to the environment and nature altogether, except there are just enough people who do care about these things that the paper can’t just let them go altogether.