Every year in Asia an estimated 5 million dogs are slaughtered for human consumption. The number of cats consumed yearly in China is estimated at 4 million. 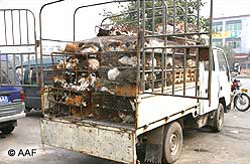 The practice of cat eating in China has historically been largely confined to Guangdong Province where cat meat is part of a famous traditional dish called “Tiger.”

Dog meat production has evolved from small-scale household businesses to a multi-million dollar industry of illicit dog traders. The World Health Organization recently cited the dog meat trade as a contributing factor in recent outbreaks of trichinellosis, rabies in Indonesia and cholera in Vietnam.

The problem is illustrated by recent news out of the Qijiang District of Chongqing in China, where activists stopped a truck carrying 900 dogs to slaughter. The dogs were a wide array of pedigree and mixed breeds, many still had tags or collars, meaning they were likely stolen from their homes. They are believed to have been on route to Zhanjiang in Guangdong province to be slaughtered.

In Vietnam dogs are an essential part of cuisine marking the end of the lunar month for traditionalists, and a heavy trade in canines has developed there supplying dogs from Thailand, Cambodia and Laos.

Whereas dogs used to be eaten for reasons of poverty, increasingly dog meat has become a delicacy, and often consumed for its perceived medicinal properties.